Media Legend, Vy Higginsen Aims to Save the Music with "Sing, Harlem, Sing!" 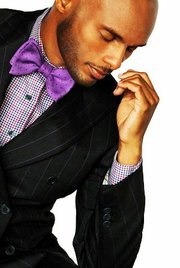 R&B singer, Kenny Lattimore is ready for a change. The vocalist recently launched his own label, SincereSoul Records, having inked a distribution deal with EMI Label Services in conjunction with Capitol Records to release his new album, Back 2 Cool. This marks the first time in Lattimore's over 20 year career that he hasn't been signed to a major label and it's making him more confident than ever. "For years I been a person who has been flexible to other's opinions and ideas," he says. "But at this stage in my life and career I have embraced the fact that I know what I am talking about. I been out with my audience long enough to understand our connection and what they expect of me. Those elements make you fearless."It takes courage to open a new lounge in the current economic climate but that hasn't deterred, Alyah Horsford-Sidberry. With the debut of Cove Lounge on Harlem's Lenox Avenue strip, Horsford-Sidberry hopes to not only provide a sophisticated environment replete with drinks and food, but she also wants to support Harlem's cultural community. "I have a passion for theater and the arts and I want to showcase different artists and have art exhibits. Old Harlem is where people came to hear good music and see fresh live entertainers so that's where I want to go with that," she says.When it comes to showcasing Harlem's artistic community few events cover as much ground as Joyce Adewumi's "Celebrate Diversity, Celebrate You Festival." The event held its third annual presentation this past weekend and featured music, dance, salsa, poetry and local politicians such as CongressmanCharles B. Rangel. Rangel made a commitment to help make next year's event an even greater success. "Next session I promise you to bring diplomats from all over the city and at the United Nations. I'll ask them to come to spend an afternoon with us," he promised. "They have so much to learn from us and we have so much to learn from them. Each one is gonna get bigger and bigger."This week the New York Public Library (NYPL) will get bigger, hair that is, with the arrival of "Styled by Literature," at Seward Park Library. The event which is produced by Souleo Enterprises, LLC will feature free makeovers by drag queens and style advice from Mr. Mickey, Paper Magazine editorial director.Finally, after four years at the helm of Harlem Arts Alliance (HAA), Michael Unthank has stepped down as the organization's Executive Director this past Monday June 4th. The Board of the Harlem Arts Alliance in acceptingUnthank's departure said, "He has provided invaluable leadership in generating high awareness of HAA as an important voice in the arts and culture community in New York and throughout the tri-state area."Under Unthank's stewardship HAA's membership has increased 100% to over 1000 members and associate members this year. At the same time, HAA's expanded service offerings including the Arts Development Seminar Series, Harlem Community Arts Fund, (small grants program funded by the Upper Manhattan Empowerment Zone), HARLEM WEEK, (supported by The Greater Harlem Chamber of Commerce), and the highly successful Harlem Arts Advocacy Week, now in its sixth year, have found support from a broader base of public and private funders. Jewel Kinch Thomas, former Executive Director, Riverside Theater, will serve as the interim Executive Director of Harlem Arts Alliance.In the words of Rangel, things can get only get bigger from here on out forUnthank, HAA, NYPL and Harlem's overall artistic community.****Souleo Enterprises, LLC is the umbrella company that creates and produces entertaining, empowering and informative media and philanthropic projects by founder, Souleo.This article is courtesy of our partner The Harlem Arts Alliance****The Harlem Arts Alliance is a not for profit arts service organization celebrating 10 years of service to a prestigious list of members such as the Apollo Theater, the Greater Harlem Chamber of Commerce, Columbia University, Harlem Stage (Aaron Davis Hall) and over 850 more cultural/arts institutions and individuals. The weekly column, Harlem Arts Alliance Presents: On the "A" w/Souleo, covers the intersection of the arts, culture and entertainment in Harlem and the greater NYC area.For more information on HAA please visit: www.harlemaa.orgFor more information on Souleo please visit: www.souleouniverse.com