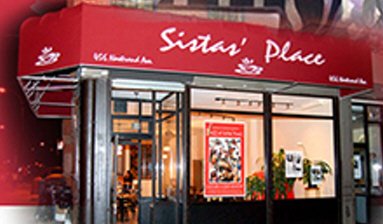 Sista's Place, one of the most swinging little jazz clubs in the city, located in Brooklyn (456 Nostrand Ave.), continues to maintain its reputation by showcasing dynamic jazz musicians who are not always on the main jazz radar but have reputations that precede them nonetheless.

As jazz musicians forge new explorations outside the jazz box, Abdullah's band employs an infusion of poetry, vocals, the music of Sun Ra and a mixture from the African Diaspora.

This performance celebrates Abdullah's earlier band, the Group, and its live recording from 1986 on No Business Records. That recording features the original members of Ahmed Abdullah--violinist Billy Bang, alto saxophonist Marion Brown, drummer Andrew Cyrille, bassists Fred Hopkins and Sirone--in a performance on Sept. 13, 1986, at the Jazz Center of New York, 380 Lafayette St. The band was a hard-hitting improvisational force that came out of the exciting loft scene.

Carl Bartlett Jr., a young saxophonist who dabbles in traditional jazz but loves to swing, will lead his self-titled quartet on Jan. 26 at the Garage Restaurant & Cafe (99 Seventh Ave. South) in Greenwich Village from 10:30 p.m. to 2:30 a.m. Bartlett surrounds himself with an all-star cast of great musicians who are leaders in their own right: pianist Sharp Radway, bassist Essiet Essiet and drummer Sylvia Cuenca. For reservations, call 212-645-0600.

Dorthaan's Place, a new happening of intimate jazz brunches at NICO Kitchen & Bar, located in the New Jersey Performing Arts Center in Newark, curated and hosted by "the Lady of Jazz," Dorthaan Kirk, a jazz activist and WBGO's special events and programs coordinator. On Jan. 20, saxophonist-composer-flutist Don Braden's Organiz Group will perform with special guest vocalist Vanessa Rubin. There will be two shows at noon and 1:30 p.m. Tickets are $45 per person, which includes a brunch and concert, $15 for children under 12.

One of the highest honors presented to a jazz musician is the National Endowment for the Arts Jazz Masters Award. Among this year's 2012 four inductees is singer-songwriter and pianist Mose Allison. Although he is a legendary jazz and blues vocalist-pianist, his music crossed tracks to influence an impressive list of blues and rock musicians such as Jimi Hendrix, the Rolling Stones, Tom Waits, the Yardbirds and the Who (who made "Young Man Blues" a staple of their live performances and used it to open their original "Live at Leeds" album).

Alto saxophonist Lou Donaldson is known for playing hardcore jazz funk after his 1960s Blue Note hit "Alligator Boogaloo," though his earlier music consisted of bop with Thelonious Monk and later hard bop with Horace Silver. He was also a member of Art Blakey's band. Today, his sets include everything from humorous jokes to the blues, funk to singing. If he plays a ballad, you will understand why they call him "Sweet Pappa Lou."

Other recipients of the award included the sassy Lorraine Gordon, owner of the famed Village Vanguard--one of the most prestigious jazz clubs in New York with the longest life span to date (it opened in 1935 under Max Gordon as a music room for poets, folk singing and the like, then in 1957 it became a jazz club)--and one of the greatest Latin jazz pianists around, Eddie Palmieri, who helped take salsa to another level with his legendary hit "Azucar Pa' Ti." The pianist is a native New Yorker who was inspired by his brother Charlie at a very young age.

They were presented their noble titles at a live concert and ceremony on Monday evening to a packed house at Jazz at Lincoln Center in Manhattan. The honor is the highest federally supported award for jazz artistry; those recognized receive a $25,000 grant and a tribute performance. Since 1982, the NEA has recognized 128 Jazz Masters (or group awards), all of whom were living at the time of their selection. In addition to the one-time grant, recipients are also invited to participate in NEA-sponsored live performances.