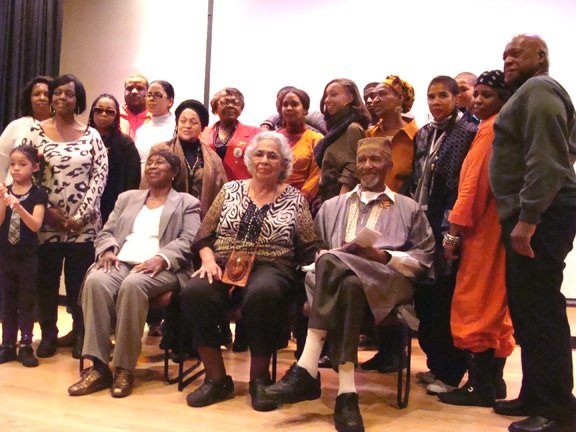 Last year everyday people put their hands in their pocket and put $900 in the commissary accounts of political prisoners locked down in New York state facilities.

to the Families of our Political Prisoners & Prisoners of War.

"The dinner has grown steadily and is now in its 17th year. It sends a message of support and solidarity to the families of Political Prisoners. These parents, spouses, siblings and children of our caged freedom fighters suffer and feel pain every day of these unlawful incarcerations," said former political prisoner in exile Herman Ferguson, who is also MXCC Chairman Emeritus "The dinner also sends a message to our political prisoners that they are not forgotten and that our movement continues to give honor and respect to the sacrifices they have made of youth, family and freedom in our suppressed rebellion for self-determination and nationhood. Every person who embraces the idea of liberation of our people should join the Jericho Movement and others in working for the freedom of all Political Prisoners."

Every year mothers, fathers, siblings, sons, daughters and grands gather to break bread and talk about their loved ones. There is always a positive loving energy in the room. They state unequivocally that their family members - some of whom have been in prison for three decades or more - are there because of their political beliefs, targeted because of their affiliation with groups like the Black Panthers and the Black Liberation Army.

"We were able to contribute over $900 last year to the commissary accounts of several of our Beloved Elders who are locked down behind prison walls," said Charles Mitchell, member of MXCC. "These funds go to helping them by paper and pens to write back to people that write to support them and to correspond with their lawyers as they continue to fight in the courts for their freedom; the funds also help them by the ordinary toiletries and items that help them live as comfortably as they can in situations where they are locked down 23 hours a day."

Mitchell added, "If you can't attend please pay for a ticket and send some young person in your place - or just contribute to the cause!"

"It is heart breaking to see our brothers and sisters in these inhumane facilities, and for unbelievable lengths of time. The government tells us that there are no political prisoners - yet the facts prove otherwise. We've had a few people eventually get out...but there are too many incarcerated. They are Black, Latino, Indian, white and female," said Mani Gilyard, co-chair of the MXCC.

"We honor the relatives of the prisoners who go through tremendous amounts of fecal material to visit them. However, the incarcerated appreciate the fact that we have not forgotten them and that with the constant pressure to prevent them from obtaining care packages from their relatives and friends the monies we put into their commissary accounts are extremely helpful and greatly needed and appreciated."

Gilyard told the Amsterdam News, "We can do so much more...if we would just acknowledge our strength. We've got to come together (organize), and act like people (citizens), and apply pressure to everyone (politicians, ministers, etc.) Stop spending our money for gold teeth, diamond earrings (on men), $300.00 sneakers...that we may lose our life when someone else wants them. We as a people through away too much money. We've got to stop spending our money on things that we want and beg for things that we need. Here in New York City we are the largest 'minority' and we could accomplish anything we want...if we only want it bad enough and if we just ORGANIZE. Join with us so we can acquire the strength to bring our Brothers and Sisters home."

Dequi Kioni-sadiki, co-chair of MXCC told the Amsterdam News, "We honor our PPs because as members of the BPP/BLA, they served and defended poor and working-class Black communities across this country with free breakfast programs, health clinics, sickle cell anemia testing, Liberation schools, food pantries, detox and drug treatment and an end to the police terror/violence/murder of Black/Brown men, women and children. We honor our PP/POWs because they and their families have lived the ugly truth of Cointelpro's war on Black people up close and very, very personal for the past 40 years, because 20-25 of them have served a collective 800+ years of unjust political imprisonment because the police, courts, parole boards and mainstream media have criminalized them and ignore the reality of U.S. held PP/POWs. But we the community, make clear these are not criminals, they are our freedom fighters who carry on the dreams shared by Queen Nzingha, Harriet Tubman, John Brown, Malcolm, Fannie Lou Hamer and a host of others, who believed Black people have just as much right to self-determination, justice and liberation as whites, and put themselves to work with the goal of making that a reality."

The wife of political prisoner Sekou Odinga told the Amsterdam News. "If more of us took seriously the need to be in the service of the People, walking the walk, and not just talking the talk, it would not be long before the socio-political injustices destroying our families and communities would cease to exist. And so, for 17 years strong, as we work to educate those who don't know that PP/POWs do in fact exist in this country, we honor our PP/POWs for reminding us as Abdul Majid says 'freedom ain't free, and it don't come cheap.'"

"At the dinner we will focus on 'Transforming Solidarity: Working Together to End Political Imprisonment & Mass Imprisonment!" said Iyaluua Ferguson, wife of life long activist Herman Ferguson. "All proceeds to benefit Political Prisoners/Prisoners of War represented at the dinner."

Keynote speakers include Johanna Fernandez, the director of "Justice on Trial: The Case of Mumia Abu-Jamal;" and

Meanwhile on Monday January 21st , there will be a book signing with Herman and Iyaluua