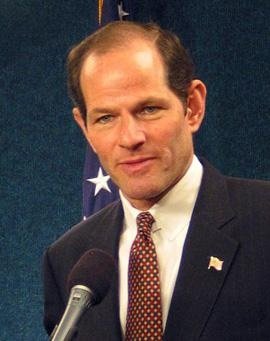 Standing on the corner of 145th Street and St. Nicholas Avenue in Harlem on Monday morning, a young woman was collecting signatures for Anthony Weiner to get on the ballot for his mayoral bid. Not too far from her at a newsstand, a New York Times’ front-page story featured Eliot Spitzer’s announcement to run for city comptroller.

Weiner and Spitzer, two disgraced politicians seeking office again? Yes, and Weiner is making quite a splash in the mayoral race. Polls, depending on which you consult, show him either ahead of the other candidates or in a dead heat with Speaker Christine Quinn.

This good showing by Weiner, who resigned from Congress after photos of his crotch made the rounds on social networks, may have prompted Spitzer to get his second act together and contest Scott Stringer to be the city’s money man.

Whether Weiner’s good fortune prompted Spitzer to resume his political career after he was caught in a prostitution scandal and had to step down as the state’s governor five years ago was not disclosed in an interview he conducted recently with The New York Times on its website.

“I’m hopeful there will be forgiveness,” he said. “I’m asking for it.”

Apparently it’s not exactly an empty plea since New Yorkers have a history of forgiving or it could be amnesia. Whatever the case, Spitzer, 54, once dubbed the “Sheriff of Wall Street” for his aggressive prosecution of wrong doers during his tenure as attorney general, has great name recognition, particularly from his recent television appearances.

An immediate concern for voters is Spitzer’s integrity and if he’s someone they can trust to manage the pension funds and the comptroller’s office honestly and with expertise. Anticipating this issue, Spitzer said he hoped the financial community will want a comptroller “who understands markets.”

According to Hank Sheinkopf, a noted political consultant, Spitzer “wants back into public life and this is the first real opportunity. He can win because he has a name though, and looks like the expert in a financial position.”

While Stringer has raised nearly $3 million, this is small change for Spitzer given his personal wealth and his ability to command big bucks. And if money isn’t a problem for Spitzer, he may find it quite a challenge to gather the necessary 4,000 signatures by Thursday. But if you got the cash, you can find the volunteers. Ask Weiner’s signature hunters.

Yes, the sheriff is back, but has he really been gone?