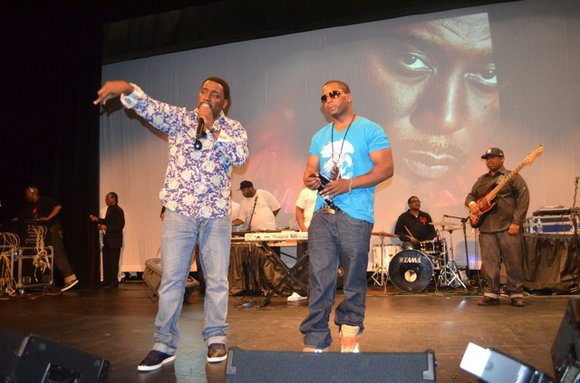 Team Fearless continues to play a pivotal role in ensuring that the early icons of hip-hop are acknowledged and remembered each year during their annual awards ceremony. The popularity of the Team Fearless Honors continues to grow without major sponsors; its buzz is based almost entirely on street promotions. Fans, supporters, b-girls and b-boys swarmed Mason Hall at Baruch College on June 22 to pay homage to some of hip-hop’s pioneers.

This year’s host was one of the first female rappers responsible for the exposure of artists like Biz Markie and Big Daddy Kane. Roxanne Shanté kept the show on course all night long with her wit, humor and impromptu improvisations, which were indicative of her vast knowledge of hip-hop and its history. She should host award shows more often. Shanté is a true entertainer, not to mention a hip-hop icon in her own right. The Queens native still has that young, high-pitched, spunky trademark voice that made “Roxanne’s Revenge” a classic.

“This show here is for real. This is the beginning. There wouldn’t be any hip-hop if it wasn’t for us,” said Gee. Gee was one of the original members of the Treacherous Three until Special K replaced him when Gee went solo. “Today’s young people will get a chance to see where it all came from. Before there were records, we were in the parks performing for free.”

Presenters included T La Rock, Big Jeff (Zulu Nation), Johnny Famous, Disco Twins and DJ Red Alert. Before Red Alert presented his award, he took time to thank all of the fans for their support throughout the years.

“Thank you for participating, dancing and enjoying the way we expressed our love for this music. You gave people like myself the inspiration to do what I have been doing so long,” he said.

This year marks Red Alert’s 30th year in commercial radio, a remarkable achievement. He presented the award to DJ and producer Tat Money, one of Philadelphia’s most renowned hip-hop recording artists, who is responsible for hits from groups like Steady B, Cool C and Three Times Dope.

“He may not be remembered for talking a lot, but when he is on the turntables, he is about his business,” said Red Alert. Former DMC World DJ champion Cash Money, also from Philly, won an award.

“As a member of Public Enemy, I have received many awards. This one means more because it is from my peers. It’s one thing to get an award from the Rock and Roll Hall of Fame. That’s great. But to be recognized by the pioneers of hip-hop means a lot more than getting it from someone counting money in a boardroom all day,” said Juice. Juice feels that many of today’s artists are caught up in false bravado and the images conveyed in the media. He wants the old school to lead by example and encourage contemporary artists to learn the history of hip-hop, staying true to its art form.

He added, “The thing about it is that everybody wants to do this for money. We have gone from doing this for love, which is what the pioneers did, to doing it for money.

“Today’s hip-hop artists never did it for love. So as far as them coming out to show some love, [it] doesn’t equate to them.”

The audience was treated to a memorable evening of entertainment, complete with DJ tricks and performances reminiscent of the golden era of hip-hop.

“This was a fantastic evening. Last year, we had about 16 honorees. This year, we had 38,” said Tito Dones, show founder, Team Fearless CEO and member of the legendary rap group the Fearless Four. “I covered a period from 1978 to 1996 with the talent that performed this year. It was incredible, and next year, it will be even bigger.”