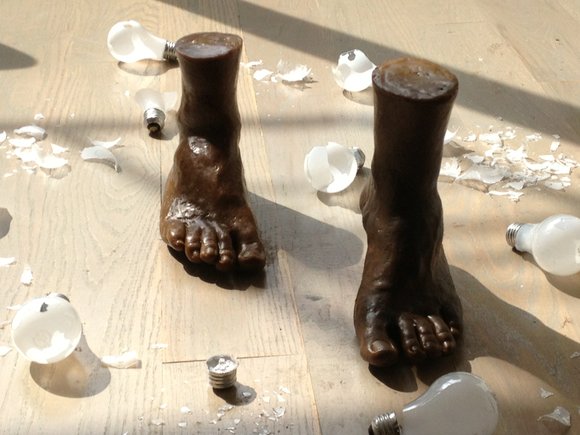 "The broken have been Chosen" by Mike McManus

Persons visiting the “Motown to Def Jam” art exhibit won’t be able to practice their dance steps, but they will see how 49 young artists have interpreted the music of these dynamic record labels through their artistic creativity.

The “Motown to Def Jam” exhibit is a unique project that is currently running simultaneously in four Harlem art galleries that highlights music with powerful messages from the record labels of Chess/Stax, Motown, Philadelphia International and Def Jam.

“There have been several debates in the news about the state of mainstream music over the past few years, from is hip-hop and R&B dead, to whether or not certain lyrics promote a culture of violence and materialism,” said Souleo, curator of this exhibit. “I wanted to curate an exhibition that would bring greater attention to the history and impact of Black music creating a positive change in the world while also creating a platform for visual artists to gain greater exposure.”

The exhibit, which runs now through July 26, can be seen at La Maison d’Art (259 W. 132nd St.), which presents the interpreted music of Chess/Stax Records. The gallery is open Wednesdays 4-7 p.m. and weekends 12-5 p.m. It’s best to email info@souleouniverse.com.

A piece from the Def Jam exhibit by Dianne Smith, “Afro Puff”—simply a large afro with a black pick attached to a clinched fist—is her vision of Public Enemy’s “Fight the Power” from their album “Fear of a Black Planet.” Artist Mike McManus interprets Kanye West’s cut “Jesus Walks” from the album “The College Dropout” (2004) with an installation of two Black feet walking through broken light bulbs, titled “The Broken Have Been Chosen.” JaSon Auguste’s piece “Love Conquers War” is his interpretation of “Tribes at War” from Nas and reggae vocalist Damien Marley’s album “Distant Relatives.”

“In this age of seamless perpetual war amongst the tribes of men, there seems to be no end to the conflicts of individuals, states, nations and its peoples,” noted Auguste. “But where there is destruction, there is a high price for all to pay the destruction of our lives.”

At the Chess/Stax exhibit, Jeffrey Allen Price’s “Ole Man Trouble,” an acrylic on canvas, is based on the track “Ole Man Trouble” from the album “Otis Blue: Otis Redding Sings Soul” (Stax Records, 1966).

At the Motown exhibit, Jeremiah Kyle’s collage “Love Child: Take a Look at Me” comes from the album and title track “Love Child” by Diana Ross and the Supremes (Motown, 1968). Philadelphia International is ignited by visual artist Tomo Mori’s depiction of Teddy Pendergrass (canvas of deep reds and blacks) from Harold Melvin and the Blues Notes’ “Wake Up Everybody.”

“The process for this project started with my researching songs from each label to create a pool of socially conscious options from both popular and obscure artists,” stated Souleo. “The main criteria was the song had to be distributed by one of the five labels and must be socially conscious. After artists chose a song, they followed their inspiration to create a visual interpretation of the music.”

Souleo and Jacqueline Orange, founder of ArtCrawl Harlem, met with each gallery, sharing the vision of the project. Since music is universal and the music and record labels of Chess, Stax, Motown, Philadelphia International and Def Jam were significant forerunners in Black music, the galleries were quite interested in the project.

“I think what also made the galleries so interested in this project is the fact that we have so many changes going on in our community as a result of gentrification, and that a project like this reminds us of our roots and bridges the gap between the past and now. These songs that we focus on about racism, economic disadvantages, gender issues and so forth are relevant today and exist in our community on a daily basis.”

The exhibit also has gallery talks. The final one honoring Def Jam’s “Fight the Power” takes place on July 20 at the Sol Studio 3 p.m.-5 p.m.

Meanwhile, on July 19, Souleo will conduct a Q&A with vocalist Martha Wash, a former member of the Weather Girls known for such hits as “It’s Raining Men” (1982) and “Everybody Dance Now.” She will discuss overcoming life’s financial challenges and her various new ventures. (Wash filed suit against Black Box and C&C Music Factory for failing to give her due credit for her lead vocals on their albums.) She recently released her stunning new LP, her first in two decades, titled “Something Good.” The Q&A takes place at the Bronx Library Center, 310 East Kingsbridge Road, at 6 p.m.-7 p.m.

Both events are free and open to the public.

Poet, author, playwright and bandleader Amiri Baraka and his poet-wife, Amina, will present “Kimako’s Blues People” on July 20, 8 p.m.-11 p.m. at 808 S. 10th St. in Newark, N.J. It will be a night of jazz, spoken word and blues. Pianist D.D. Jackson will also be featured. He just returned from performing with the World Sax Quartet. The price for the evening is a mere $10.