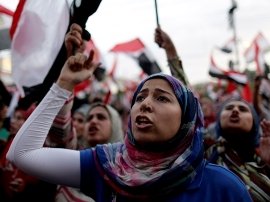 Jul. 16 (GIN) – Backing down from its heavy-handed punishment of Egypt after a military shake-up of government, the African Union is offering an olive branch. They're sending a high-level panel of African leaders to seek a solution to that country’s political and sectarian crisis.

While most countries expressed concern, and hope for a rapid return to democracy, few countries took punitive action when President Mohamed Morsi was removed and a caretaker government installed. The action was initially backed by millions of Egyptians who rallied in the historic Tahrir Square.

The AU panel includes Alpha Oumar Konare, former President of Mali and former chair of the AU Commission; Festus Gontebanye Mogae, former president of Botswana and Dileita Mohamed Dileita, former Prime Minister of Djibouti. The panel will be assisted by a group of experts.

Egypt becomes the fourth country in the past four years, after Madagascar, the Central African Republic, Guinea-Bissau and Mali (which has since been reinstated) to be suspended from the organization.

The suspension includes all branches of the AU, reducing Egypt’s influence over internal African affairs, at a time when the North African giant had been attempting to regain influence in the continent.

The Egyptian foreign ministry, in response, expressed "deep regret" in a statement posted on its official Facebook page.

At least one sub-Saharan African differed with the AU over its suspension order. In a commentary in Uganda’s Daily Monitor newspaper, an acerbic retired career diplomat Harold E. Acemah wrote: “I hardly need to remind the chairperson of the AU, Ms Nkosazana Dlamini Zuma, that power belongs to the people and it is the Egyptians themselves who decided to take back the power which they had, by mistake, entrusted to a novice who, within one year in office, had the audacity to arrogantly declare himself the new pharaoh of Egypt.”

Acemah disputed the moral authority of the AU to suspend Egypt from the union "when many of the current African leaders came to power illegally and unconstitutionally through rigged elections, intimidation, fraud and bribery." He cited Yahya Jammeh of the Gambia and Teodoro Obiang of Equatorial Guinea as examples.

The columnist concluded with a call to the AU to immediately reverse its suspension of the embattled north African nation. w/pix of Egyptian women in anti-Morsi protest