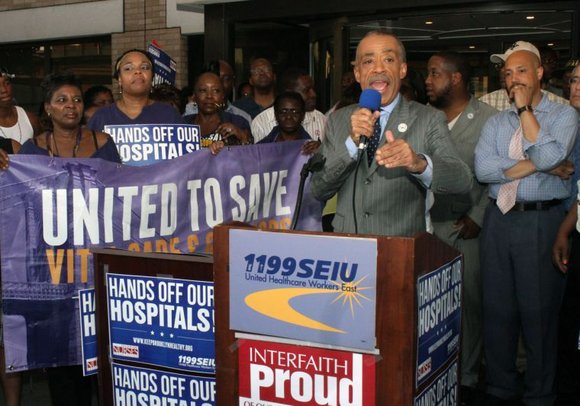 With years of financial mismanagement leaving Interfaith Medical Center (IMC) in a state of crisis, the once-promising merger between IMC and Brooklyn Hospital that was intended to shore up IMC’s finances is in danger of being its demise.

IMC may be forced to close its doors if the state doesn’t intervene. Also, in Brooklyn, the fate of Long Island College Hospital (LICH) lies in the hands of SUNY Downstate administrators, who have diverted ambulances to other facilities. Diverting ambulances away from LICH violates court orders to keep the hospital fully staffed and open for care.

As the AmNews reported last week, hundreds of workers from both hospitals, elected officials and members of the New York State Nurses Association and 1199SEIU Healthcare Workers East protested outside of Gov. Andrew Cuomo’s Manhattan offices. The demonstrators demanded that their input be taken into account when considering the fate of the medical institutions.

1199SEIU President George Gresham told those in attendance that it was Cuomo’s duty to keep both hospitals open and said that politicians are at the whim of the people and not the other way around.

As for IMC, the barrier to the merger consists of the state not giving Brooklyn Hospital the $1.6 million necessary for an investigation into the hospital’s finances in order to prove its worth as a merger partner. IMC filed for bankruptcy last year.

On 1199SEIU’s blog, a couple of workers aired out their grievances with Cuomo and the state government’s lack of mobility on their fate.

“We have a lot of very sick patients that come to our hospital who need our care,” said Monica Forde, who has worked at Interfaith as a patient care technician for 13 years. “St. Mary’s closed down. Where will they go if we close? People are going to die. We want the governor to listen to us and help us to save people’s lives.”

Alexander Achampong, a housekeeper at Interfaith, didn’t mince words either.

“Politicians don’t really care about our kinds of places,” said Achampong. “We have a lot of mentally disabled people, and we treat a lot of people with HIV. We are really necessary. We want the governor to listen to us and understand that the city needs this hospital.”