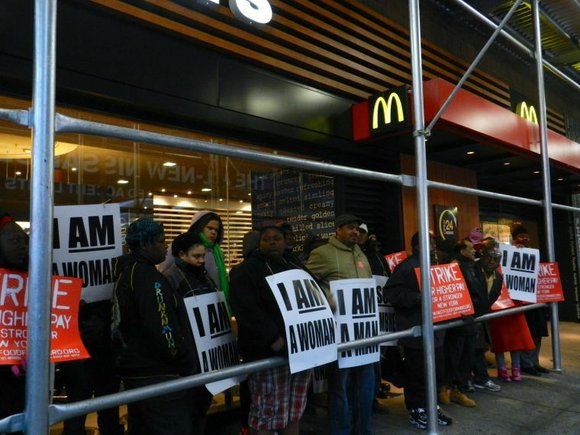 Fast food worker's strikers at the McDonald's in Times Square on April 4, 2013 Photo by Courtenay Brown

New York City fast food employees started walking out of their respective businesses today as part of a national day-long protest in favor of a living wage and the right to form a union.

Stretching from Downtown Brooklyn to Midtown to the Lower East Side and to Union Square, rallies abound around the city. At 3:00 today, New York Communities for Change, Fast Food Forward and United New York are holding a rally at East 14th Street between University Place and 4th Avenue.

Workers are calling for $15 hourly wage and the right to form a union without the fear of retaliation and an end to abusive labor practices. Workers from some of the city's biggest fast food chains (including McDonald’s, Burger King, Wendy’s, Taco Bell, Domino’s, Papa John’s and KFC) walked out of their jobs. Cities like Chicago, Detroit, Milwaukee, Flint, St. Louis and Kansas City will stage similar walk outs over the course of the week.

“Companies like Burger King and McDonald's are part of a $200 billion industry, but pay their workers so little that many of them qualify for food stamps and other forms of government assistance," said Nadler in a statement. "American taxpayers should not be forced to pick up the tab for some of America’s largest corporations. Such a profitable company in such a booming industry should pay its workers enough for them to afford at least the basic necessities."

As the AmNews has reported over the course of the past year, low-wage jobs have accounted for the majority of new jobs added during the economic recovery with retail and fast food are among the fastest-growing sectors. In an industry that makes on average of $200 billion annually, most service workers in fast food earn minimum wage and rely of public assistance programs to help feed and provide healthcare for their children.

“The workers’ actions will lift up all of New York City,” said Jonathan Westin, Campaign Director for Fast Food Forward, in an emailed statement. “If they have more money in their pockets, they’ll spend it right here, helping to boost the entire economy.”

And the fight for workers' rights has already gone national.

As the AmNews reported last week, members of the Congressional Progressive Caucus jumped in with fast-food and retail workers, clergy and community supporters in Milwaukee to speak out against wage theft and to tell Congress to focus on raising minimum wage and bring better jobs to places in the Midwest.

U.S. Reps. Gwen Moore, Keith Ellison and Danny Davis from the Congressional Progressive Caucus and members of the Raise up Milwaukee campaign took to the Wisconsin Department of Workforce Development to investigate employers that they accused of stealing money from workers. The agency is responsible for policing so-called wage theft.

Back in May, a report by Fast Food Forward called “New York’s Hidden Crime Wave: Wage Theft and NYC’s Fast Food Workers,” stated that 36 percent of workers report being required to work off the clock, 32 percent of cashiers said that they were required to pay their employer if the register was short and thirty percent of those who have worked over 40 hours a week said that did not always receive time-and-a-half pay for overtime hours.