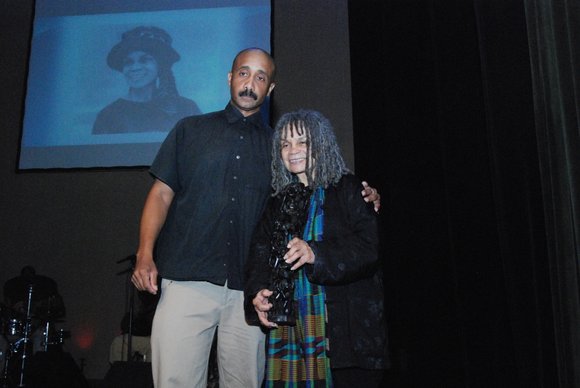 It wasn’t a full house at the Harlem Book Fair’s Phillis Wheatley Book Awards last Friday at the Schomburg Center, and only half of the winners attended, but poet-activist Sonia Sanchez was there and she was worth the time and the ticket.

Strolling across the Langston Hughes stage, Sanchez, draped in black, delivered her prescription for peaceful co-existence, which begins with healthy eating and learning to “breathe as one,” she said.

Since she was cradling the first ever Sonia Sanchez Award, presented by poet David Mills, Sanchez limited her remarks, which were only a little bit longer than her comments, when she announced that Patricia Smith was the winner in the poetry category for her book “Shouda Been Jimi Savannah.”

Like several others, Smith was not there to pick up her award, but Sadeqa Johnson was and she received the award in fiction for her book “Love in a Carry-on Bag.” She thanked her husband for “pushing me to make my dream come true.”

Other winners included “Tea Cakes for Tosh” by Kelly Starling Lyons with illustrations by E.B. Lewis in the Young Readers category; the Young Adults winner was “The Diary of B.B. Bright: Possible Princess” by Alice Randall and Caroline Randall Williams, with illustrations by Shadra Strickland; R.K. Thomas’s “Antebellum” took the prize in First Fiction; in Nonfiction/Biography/Memoir, Deborah Davis was the winner with “Guest of Honor: Booker T. Washington, Theodore Roosevelt and The White House Dinner”; and Sharon Leslie Morgan and Thomas Morgan DeWolf took home the award in Nonfiction/History and Politics for “Gather at the Table.”

Nicely interwoven throughout the awards was the music of Atiba Wilson and the Befo’ Quotet [cq] with vocalist Amalia Wattey.

Publisher Tony Rose wasn’t there to receive his award from Max Rodriquez, the book fair’s creator and host, and his absence only underscored what had come to be expected on an otherwise entertaining evening. That entertainment was accompanied by insight on Saturday with a series of panels, none more commanding than one moderated by professor Komozi Woodard with Mary Francis Berry, Jeanne Theoharis and Barbara Ransby as discussants.

Theoharis, whose “Rebellious Life of Rosa Parks” has provided readers with a fuller dimension of the “Mother of Civil Rights Movement,” opened the discussion. She quickly and appropriately placed her heroine within the current context of struggle surrounding the death of Trayvon Martin. She also recounted how Parks was thinking about Emmett Till, the youth killed in Mississippi in 1955 as “she refused to give up her seat that day on the Montgomery bus.”

If Parks is enshrined in the nation’s history, Eslanda Robeson is barely known, but Ransby, in her biography “Eslanda—The Large and Unconventional Life of Mrs. Paul Robeson,” is doing much to lift her from obscurity.

“Eslanda lived a full and large life,” Ransby said. “She was more than just Paul Robeson’s wife; she traveled widely, was an outstanding journalist, anthropologist, and was a tireless fighter against colonialism.”

Both women, Berry said, were formidable opponents of injustice, and “folks would have thought twice about putting Rosa in the Statuary Hall in Washington, D.C., if they knew who she really was.”

Those who chose to beat the sweltering heat with the proper cable hookup watched the various panels on C-SPAN’s Book-TV, and with standalone interviews with Drs. Obery Hendricks and Farah Griffin and others, viewers had an additional treat. They probably also reveled in the presentation from the Rev. Dr. James Forbes during his appearance on the religion panel. The minister may be emeritus, but he still possesses that same fire that made him such a successful pastor at Riverside Church.

With him and Sonia providing the sparks, the 15th annual Harlem Book Fair found its métier and raison d’etre.