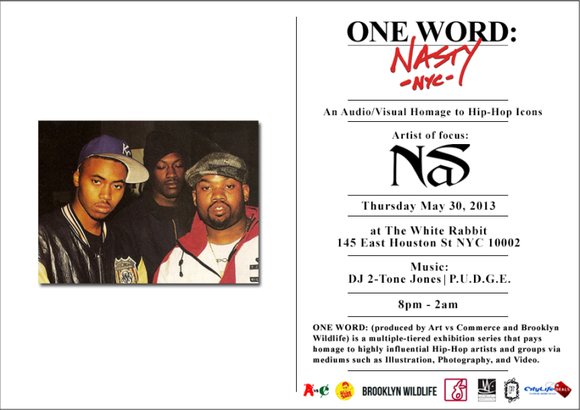 If you are a fan of hip-hop music living in N.Y? There is an event that includes an audio and visual tribute to hip-hop icons. The One Word event on May 30. is produced by Art vs. Commerce and Brooklyn Wildlife.

The event is multiple-tiered exhibition series that will pay homage to highly influential hip-hop artists and groups through a range of mediums including illustration, photography, and video , according to Gerald Watson one of coordinators of the exhibition One Word.

This exhibition will occur twice and month and the goal of the event is for the participants to be able to " soak in" and be educated which can be described as a living time capsule , according to Watson in a press release.

The main artist of the night will be grammy award nominee Queens , N.Y. native, NAS. Nas has also became an icon in both rap and hip-hop music.

Interaction in the hip- hop world will be revealed at this event giving those attending an aural and visual exploration of carefully selected works and music dedicated to the subject , according to Watson in a press release. In the first One Word exhibition the theme will be One Word : Nasty , music icon rapper , Nas once went by the name Nasty Nas.

One night out to explore the art and music of legendary rapper Nas could be one night out to remember. The event will take place tonight May 30. at White Rabbit NYC - 145 East Houston St. NYC from 8 p.m. to 2 a.m.