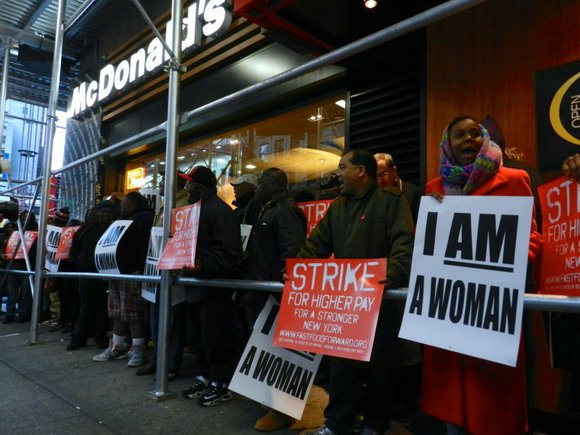 More than four hundred fast-food workers from more than 60 different restaurants - including Wendy's, Burger King, KFC, and Taco Bell - across New York City are expected to strike today. They are calling for a pay raise to $15 per hour and the right to organize and form a union without interference.

Forty-five years ago today, Dr. Martin Luther King Jr. was assassinated. Throughout the weeks leading up to his assassination in 1968, he stood in solidarity alongside sanitation workers in Memphis, as they demanded better pay, safety standards, and recognition of their union. These are the same demands for which the fast food workers say they are fighting for today.

Workers gathered in Times Square at 6 A.M. this morning to begin a series of protests which will continue throughout the day in front of one McDonalds restaurant where workers say they are being underpaid and mistreated. Protestors embodied the workers in Memphis as they carried signs "I am a Man" and "I am a Woman," popularized by the sanitations workers' protests as they sought to assert their independence against they oppression they faced by employers.

Alterique Hall, has been working at this McDonalds for three years. At 24, with a degree in culinary arts, he makes $7.25 an hour.

"It's ridiculous that we have to struggle to maintain an independence level in New York City when there are so many people just throwing money around," Hall said.

According to Hall, employees are often expected to work multiple stations, from register, to making the burgers and fries, to cleaning toilets, all for "minimal pay."

Last month, New York lawmakers included raising minimum wages to $9 from $7.25 into their budget. This change is to occur over three years.

Jonathan Westin, one of the strike's organizers and director of the social and economic justice advocacy group, NY Communities for Change, said that employees at fast food restaurants currently make "poverty wages."

"Working 15 hours a week and living in the most expensive city in this country, workers can't afford to put food on the table or buy a MetroCard in most cases," Westin said.

Westin added that workers are unable to break into the middle class because fast food corporations keep their wages so low that workers have to rely on public assistance in order to live.

Linda Dunham, a McDonald's owner and operator, maintains that all employees who work at McDonald's restaurants are valued and respected.

"Employees are paid competitive wages and have access to a range of benefits to meet their individual needs," Dunham said in a statement.

However, New York state Senator James Sanders Jr. disagreed that New Yorkers can survive on the wages they are being paid.

"It's shameful that it would take them an hour of their salary to eat here," Sanders told the AmNews. "We need to ensure that a honest day's work is rewarded with an honest day's dollar."

Similar to the way the sanitation workers in Memphis aligned with clergymen, such as Martin Luther King, fast-food employees are meeting with politicians, elected officials, and clergymen in their neighborhood to build a stronger movement. Workers and clergymen alike decided to hold the protest on the anniversary of Dr. King's assassination.

Hall said that since leaving his position at McDonalds is not an option for him due to the increased difficulty of finding a job, protesting his way to honor both himself and Dr. King.

"It's an honor to take a stand in a non-violent strike as [the Memphis sanitation workers] did before Martin Luther King's assassination," Hall said.

Protests are scheduled to continue throughout the day, ending in a Fast Food Worker Rally at 5:30 PM at Marcus Garvey Park at East 124th Street and Madison Avenue.