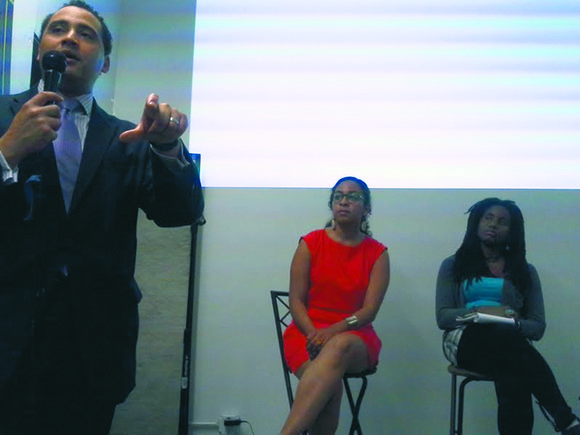 The Afro-Brazilian film director Gabriela Dandara Watson and the Afro Peruvian activist Monica Carrillo were welcomed to Harlem on Wednesday, May 22, for a screening of Watson's documentary "We, AfroPeruvians."

The documentary screening, which was sponsored by the Afrolatin@Project, LUNDU, AfroInca Produces and the Arturo Schomburg Democratic Club, took place at the art gallery Raw Space, located at 2031 Adam Clayton Powell Blvd.

Watson identifies as Afro-Brazilian because she was born and raised in Brazil, but both of her parents are from Peru. She says she made "We, AfroPeruvians" as part of a personal quest. She was a communications major at a Brazilian university and spent plenty of time organizing events around issues of Black identity, but these were mostly events about what it means to be an Afro-Brazilian.

"But in one moment, I asked myself, 'What do I know about the AfroPeruvians?' Everyone is talking about Afro-Brazilians, but I am supposed to know more about my own identity," she said.

In 2008, Watson traveled to Peru and started making contact with Afro-Peruvian communities and activists. She started filming interviews with people because she wanted a record of the conversations she was having. Eventually, she found that the content of the interviews was good enough to be made into what she calls "a very simple documentary: self-funded and made with a hand-held camera."

"We, AfroPeruvians" features Afro-Peruvian community members and activists examining questions like what it's like to be of African descent in Peru.

"It's quite hard," answers Milagros Carazas, a literature professor at the Universidad Nacional Mayor de San Marcos who has written numerous books on Afro-Peruvians. "Our racism is a special kind of Peruvian racism. It's veiled, not obvious. People use many ways to insult you: with names, insults, jokes. They always find a way to devalue someone."

Rolando Palma, a local engineer, explains that Black Peruvians still have a hard time gathering information about their African heritage. And during another poignant scene, a young activist notes that in the local book markets, there are no published materials about Afro-Peruvians, much less about any other North or South American communities of African descent. Without any material to educate Afro-Peruvians or to help the general Peruvian public learn about Black heritage, there is a constant struggle in the fabled Andean nation against virulent racism.

Watson told the audience that came out to view the May 22 screening that she hopes her documentary helps in the effort to forge stronger connections between African-Americans and Afro-Latinos. "It's time for everybody to know that we have Black people everywhere in Latin America," she said, "and we have the same problems. And so we have to band together to face them."