Citizen groups dismayed at being barred from african union summit 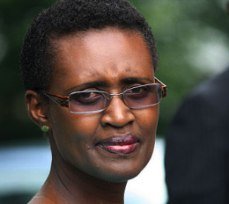 Citizen groups dismayed at being barred from african union summit

May 21 (GIN) - As the African Union prepares to mark the 50th anniversary of the Organization of African Unity (OAU), AU officials have for the first time refused access to their high-level summit by citizen groups, civil society organizations and foreign diplomats, among others.

"This has not come from the commission, this has come from the member states themselves," said AU chair Nkosazana Dlamini-Zuma, speaking in Addis. "We are implementing what we have been asked, which is very reasonable in our view."

"Closed sessions are closed sessions. We decide which ones are closed. And if you are not going to be participating in the discussion, why be here?" Ms Dlamini-Zuma asked, adding that she did not understand why it had become an issue.

Nongovernmental organizations (NGOs) fear they are being excluded just when critical discussions on Vision 2063 -- a blueprint for the continent's development over the next 50 years -- are due to take place.

Winnie Byanyima, executive director of Oxfam Int'l expressed dismay at the lock out from the confab in Ethiopia's capital city.

"Civil society should have as much access as possible to the discussions of our political leaders on the future of our continent," said Byanyima, speaking to South Africa's Business Day. "Doing otherwise will send a wrong signal, symbolically, that the African Union is closing space to civil society. That is not a signal that I think the member states want to send to African people."

Other AU shortcomings were highlighted by Dr Amukowa Anangwe, a consultant to the 54-member bloc. The AU, he said, still sufferers from the OAU's principle of non-interference into the internal affairs of member states which left dictators free to continue trampling on the rights of their citizens.

"However, since the change of name in 1999, there has been a major effort to put in place mechanisms for conflict management and fewer countries are invoking the principle of non-interference," he said.

A side event to the summit was the symposium "Being Pan African" attended by "leading intellectuals and a wide public including Rastafari from Africa and the Diaspora," according to a press statement. It concluded with a call to bridge the gap between the Pan African political elite and the grassroots; to be more inclusive of women and youth; and to encourage dialogue among the various Diasporas on their relationship to Africa.

Finally, Jamaica will send Carlton Masters as its first-ever representative to the AU. Jamaica's move follows Haiti's accession to the African Union as an observer country.