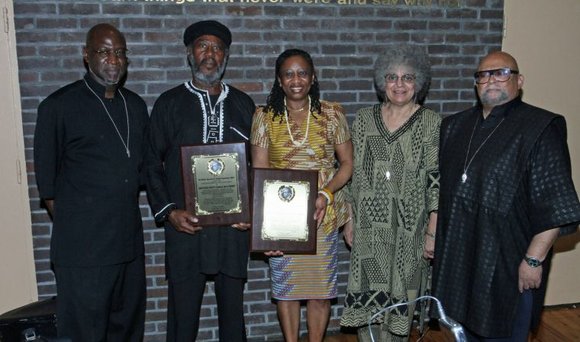 On Friday, the 88th anniversary of the birth of Malcolm X (also known as El Hajj Malik Shabazz), taking place 48 years and some months after his assassination, the New York Chapter of the National Association of Kawaida Organizations (NAKO), in conjunction with the International African Arts Festival (IAAF), held the 44th annual Malcolm X Black Unity Awards Program at the Restoration Plaza in Brooklyn.

The keynote address was given by renowned scholar and activist Dr. Maulana Karenga. His lecture was based on material from his forthcoming book on Malcolm X, titled "The Liberation Ethics of Malcolm X: Critical Consciousness, Moral Grounding and Transformative Struggle." The awardees were the husband-and-wife team Roslyn and Fritz-Earle McLymont, both of whom have decades of extensive entrepreneur leadership experience in building economic projects across the Pan-African world.

NAKO and IAAF will join forces again for the upcoming 42nd annual International Arts Festival, which will take place from July 4-7 at Commodore Barry Park, and the 24th annual Symposium on Culture, Community and Struggle, taking place Saturday, July 6, at P.S. 287 on Navy Street across from the park. For information on these events, call 718-638-6700 or email nakoinfogroup@yahoo.com.