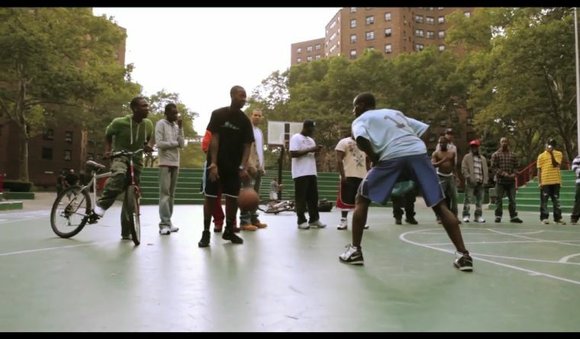 While chronicled in movies and highlighted through various summer tournaments, outdoor basketball still lacked the one definitive documentary that could encapsulate the culture from its beginnings in New York City. Although the focus on the athletic gods of the blacktop should be expected, what about the average baller? New York native Bobbito Garcia and France-based Kevin Couliau wanted to take care of that once and for all.

"Doin' it in the Park: Pick-up Basketball, New York City" showcases, explains and praises the culture of outdoor pick-up basketball so well that someone not interested in the sport at all could understand and embrace it. Released worldwide digitally this month, "Doin' It" has already earned the praise of basketball fans and fans of great documentaries alike.

Garcia, a world-renowned DJ and an author ("Where'd You Get Those? NYC's Sneaker Culture: 1960-1987"), got together with Couliau, a photographer, to visit 180 outdoor basketball courts around New York City's five boroughs and documented every last minute of their journey. Along the way, they spoke with streetball legends like Pee Wee Kirkland, NBA legends like Julius Erving and ballers at all levels of ability.

Sitting with Garcia at Goldcrest Post (and Couliau via online video chat) the day after a screening, the two men broke down their reasons for dedicating a feature-length documentary to pick-up basketball.

No stone is left unturned in "Doin' It." Pick-up games like "21" and "5-2" are explained in great detail; the park hierarchy (starting as a kid on the monkey bars and graduating to the court) is chronicled as well. When Garcia was asked if he felt certain elements of pick-up basketball were overlooked before his documentary, he said that it was just a case of other things being more marketable.

"There have been brands. ... what they do is that they take the elements of the culture of outdoor basketball that are easily commodified," Garcia said. "The highlights, the style. And it's morphed into marketing messages and advertising messages. So what we wanted to do was go a little deeper than that and expand it and allow for specialty games to be explained, like '21' for example. Allow for, you know, an elderly person or someone who's going to be in their 50s--who's not going to be in a commercial, but he or she loves basketball--to be in it. We equalized the playing ground and gave an honest portrait of the common ball player. Man and woman."

And the concept of the "common ball player" isn't relegated to free citizens. One powerful part of the documentary focuses on inmates at Rikers Island who play pick-up games. In simply displaying the humanity of people from one of the most infamous jails in the city, the film delivers the message of edifying oneself and keeping your sanity through games and competition.

The fact that pick-up basketball is one of the few subcultures left that was able to develop organically and spread word-of-mouth isn't lost on Garcia and Couliau, and other places on the globe have added their own style of play (if not necessarily their own look) to the culture. Couliau told the AmNews that there aren't any French translations for certain words in pick-up basketball, so the English words remain a part of the language.

"The funny thing about New York City is that everyone around the world is watching New York City and getting their inspiration from New York City," said Couliau. "Of course, the style of playing is different in Europe than New York City because it's less self-centric. We play more team basketball, even on the playgrounds. Still, we are trained to copy and paste what's being done in New York City."

While many have decried losing children to the Xbox or other home video game consoles, Garcia said that more young people are playing outdoor basketball now than ever before.

"Part of the reason why we made this film was to encourage people to get out and go outside and engage in their community and participate," Garcia said. "It's free recreation."

Harlem's Maysles Cinema will be hosting a series of screenings and Q&As, which starts today, May 23. Upcoming events include: