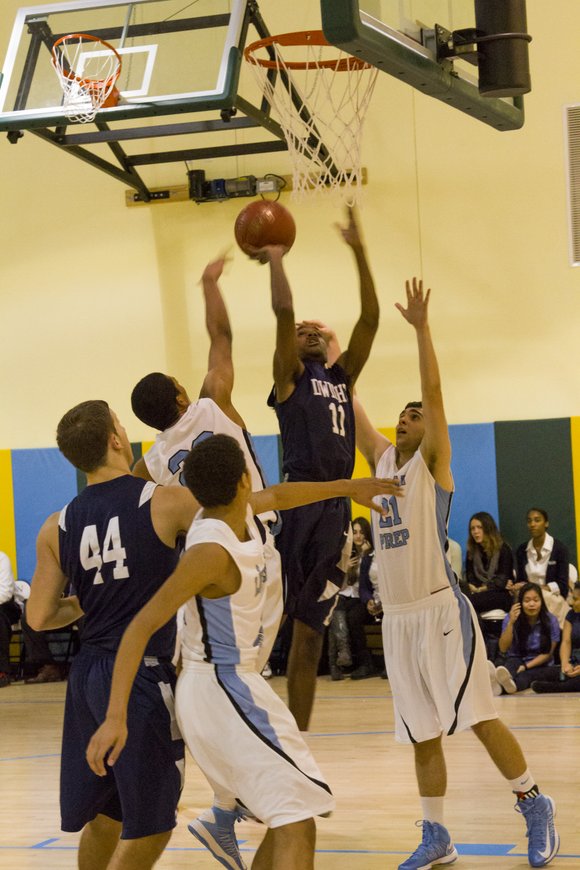 Let's say that somewhere on the island of Manhattan there is a 40,000-square-foot athletic center that features a regulation-sized high school gym, a 25-yard swimming pool, exercise rooms, locker rooms, saunas and a rooftop space. Let's also say that this particular center hasn't been in use for two decades in a city where maximizing real estate and square footage is a must.

That was the reality for one housing complex in East Harlem, but by this spring/summer, the facility will be back in use thanks to an internationally known private school.

The Dwight School announced this month that it will sign a 20-year lease with the 1199 Housing Corp., which owns the East River Landing housing cooperative, for a recreational facility located inside the housing complex on 108th Street and First Avenue. The athletic facility will be upgraded by Dwight and rechristened the Dwight School Athletic Center. The school will run the facility full-time and hire the personnel. But the deal also includes a partnership with the local community. The partnership will involve the facility being opened to residents and community members on the weekends and in the summer while the school will be the main tenant during the weekdays. The school will also add 200-seat bleachers to the gym, and the rooftop space will be converted into two tennis courts.

The private school also announced a scholarship program that will be offered to qualified residents in need at the East Harlem housing complex. The school also plans on providing a summer day camp for kids. But how did this 141-year-old school--with a number of programs and campuses in London, Beijing and Seoul--find this long-forgotten place in East Harlem? The better question is how 1199 Housing found the Dwight School.

William Dames, president of 1199 Housing, spoke with the AmNews about the birth of the partnership.

"We spent about $3 or 4 million renovating it in the last nine years," Dames said. "We had to tear out old plumbing and all of that. So we then started looking for an operator. We looked around at places like Bally's [fitness centers], and that didn't work out."

Closed since the late 1990s, the place had fallen out of use among residents, according to Dames. A place that used to host basketball tournaments in the late 1970s and early 1980s was essentially abandoned. Dames told the AmNews that the lack of use, coupled with costs and a recommendation from the city, led to its closing.

"There was no construction or ventilation for the swimming pool, so the city recommended that we close it down," Dames said. "Activity had pretty much ceased in the facility. We were spending maybe $100,000 a year just to keep it going. So we looked for a middleman to help us find a perfect suitor."

Dames and 1199 Housing contacted Cushman & Wakefield, the commercial real estate brokers and consultants based in Midtown. It was through them that the creation of the Dwight School partnership took place.

"We contacted them to find an operator, and they brought Dwight school over to us," Dames said. "We were pleased about the prospect. I mean, we couldn't invest the kind of money that would be required to operate the facility. We couldn't charge fees like that. We needed an outsider.

"We think it's a win-win for us, and we'll have use of it mostly during the summer at no cost to our shareholders," Dames continued. "No fees to use the space, so we consider that a benefit. They're leasing the place, so we get $300,000 a year and $25,000 a month from them for its use. It takes a load off of our shoulders."

But when the AmNews talked to a few residents and employees of the housing complex, they all said that they had never heard of the deal in the works with the Dwight School or anyone.

One building maintenance worker, Fernando (he wouldn't give his last name or age), said that the first time he heard of this partnership was when the AmNews told him. "But I think it could be a good thing," he said. "The place needs to be used."

Several other residents who wished to remain unidentified, including some who've lived there for decades, said that they also thought the deal would be a good thing for the community even though they hadn't heard of it either.

Back in January, the AmNews went on a tour of the facility. Accompanied by Dwight School Chancellor Stephen Spahn, Assistant Director of Global Marketing and Communications Laurie Silbersweig and newly named Director of the Athletic Center Mike Bailey, the AmNews saw firsthand the hidden treasure inside the First Avenue housing complex. School officials said the facility needed some repainting and insulation along with offices for building personnel. While transporting anything, let alone children, across Manhattan can be a pain, Bailey told the AmNews that he's driven to and from the school's Upper West Side location to the soon-to-be center and has figured out the best time for the lowest traffic (10 a.m.).

With 6,500 residents in the housing complex, a plethora of needs could be met by the Dwight Athletic Center: swimming classes for young and old, community gym, basketball tournaments and more. But Bailey knows that the people will tell them what they need. They can't just give them what they think they want. Bailey told the AmNews that monthly meetings between the school and residents will be used as litmus tests for the state of the relationship.

"During the signing, I was joking around with some ladies, and I said, 'What do you want from this place?' and they said, 'What are you gonna give us?'" explained Bailey, the former director of Asphalt Green, a sports and fitness facility on the Upper East Side. "That's going to be the give and take. What is this facility made for, and what do the people want? If they want to do something that just doesn't go with this facility, then that answer has to be no. But if it can be done within the range of the building, then the possibilities are endless.

"Why leave a building unused at any hour of the day--especially in New York?" Bailey asked.

While New York City is indeed a melting pot of cultures and nationalities, the communities haven't always gotten along. Spahn believes that those instances when the communities do work together are the model for this partnership. Spahn hopes to replicate that utopian view of New York with the athletic facility.

"I think New York always had communities working together, and I think that's what makes the city great," Spahn said. "And I think this is part of that tradition. I don't believe in barriers between groups is the way America's built. That's what education has to be about. It's really interesting.

"I consider it to be a privilege to be a part of this," Spahn continued. "To build a facility like it would take a lot of money." Fortunately for the Dwight School and the residents of East 108th Street and First Avenue, nothing needs to be built. It just needs to be fixed.