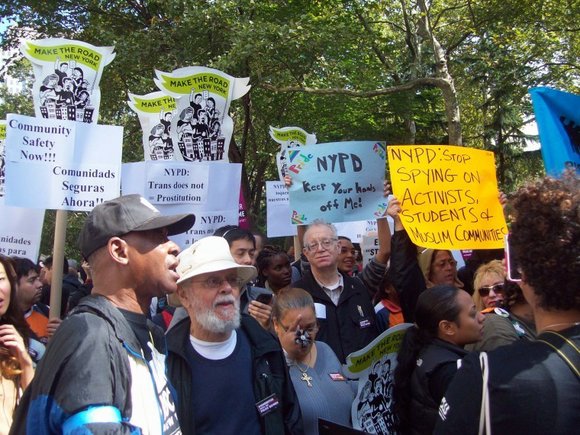 Demonstrators rally in support of the Community Safety Act near City Hall in September, 2012

The End NYPD Discriminatory Profiling Act makes it easier for New Yorkers to sue the NYPD if they have been racially profiled or discriminated by race, ethnicity, religion and national origin, gender, gender identity and expression, sexual orientation, immigration status, and/or disability and housing status.

According to the New York Civil Liberties Union (NYCLU), 89% of New Yorkers who were stopped and frisked by the NYPD last year were innocent and 87% were either Black or Latino, while a mere 10% were white. With the passing of this act, these clearly racially-biased arrests could more easily lead to lawsuits.

"The Mayor tried to scare this city into turning its back on fundamental civil liberties. We have been told the overuse and misuse of stop-and-frisk is the only path to safety. With the passage of these bills, we rejected that false choice and laid the foundation for a restored trust between police and the communities they serve," stated New York City Public Advocate, Bill de Blasio.

"This marks a vital step toward rebuilding trust between police and the people they protect." de Blasio continued, confirming his support of the bill.

The National Association of Advancement of Colored People (NAACP) also applauded the passing of the bill and marked it as a necessary step needed in New York City.

"The Council acted to restore sanity and safety to the streets of New York City and the lives of hundreds and thousands of young people," NAACP President and CEO Benjamin Todd Jealous stated.

"Today marks a great victory for the City of New York and in the fight to end abusive and discriminatory practices by the new York Police Department [...] We thank the City Council for courageously standing up for the civil and human rights of the people of this great city," the press release read.

Bloomberg has 30 days to veto the law and he is expected to do so.

In a statement released earlier, Bloomberg explained that there was a record-low number of murders and shootings in New York City, and that this legislation will hinder those efforts.