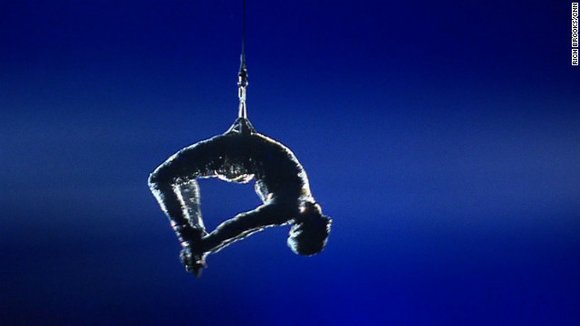 High-flying acrobats. Death-defying leaps. Bright lights and performance tents filled with adoring fans. It's the stuff of which dreams are made. After all, who doesn't want to run away with the circus?

But for Joe Putignano, it wasn't as simple as running away -- it took a lifetime of dedication and a battle against addiction to get where he is today: dangling from the 40-foot-high catwalk above the Cirque du Soleil big top.

The house lights are off, and one lone spotlight shines upon Joe's reflective mirror-ball suit.

He is tethered at the waist, head tilted back, arms reaching behind him to grab his foot, which is quickly flexing up toward his head. He starts to spin -- literally because that's what his character is supposed to do, and figuratively, because of the searing pain he's feeling in both shoulders as he contorts into this position.

Though it may seem that Cirque characters are superhuman, they too can get injured. Joe is a real human being with real muscles, bones, connective tissue and joints.

And for Joe, it's not just high-flying acrobatics that cause him pain.

Joe Putignano is a recovering heroin addict. He's been sober for almost 6 years.

"It's sort of mundane things," he says. "Sleeping hurts a lot, because I'm rolling over on my shoulder. Just drinking a coffee. Washing my hair hurts a lot."

After nearly 1,000 performances of "Totem" and a lifetime of gymnastics training, Joe has finally hit a wall.

"I need to have surgery," he says matter-of-factly. "I really wanted to see if I could continue on, and just kind of manage it, do a lot of physical therapy, and get out of this pain. But we've done that, and we're kind of out of options."

Joe has what's called a superior labral tear from anterior to posterior -- a SLAP tear for short -- in his right shoulder. His biceps tendon is also torn, and he has a third tear in the subscapular area underneath his shoulder blade.

His left shoulder has just the one injury -- another SLAP tear. That one needs to be operated on as well, and soon, before he has permanent damage to the joint.

And surgery has to be done in a way that preserves Joe's abilities to perform.

"I suppose there's always a risk that when they do fix it, that it will destroy my flexibility," Joe says. "I'm useful in this industry because of my flexibility."

Now this contortionist is headed to another arena with bright lights, where all eyes are focused on him: the operating room. Surgery is scary for anybody, but for Joe, it is potentially the most terrifying thing he's ever encountered.

Joe is a recovering heroin addict. He's been clean for more than five years, but the thought of anything affecting his sobriety -- particularly opioid painkillers after surgery -- is something he isn't willing to risk.