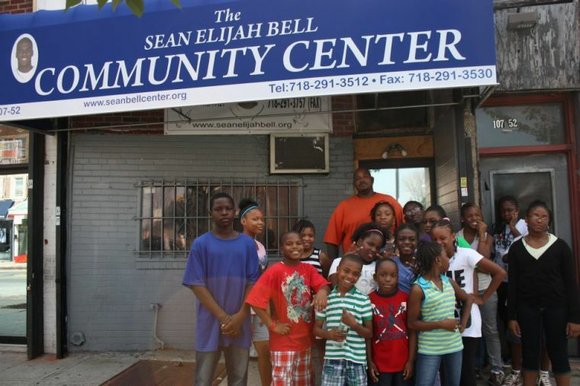 Administrators at the Sean Elijah Bell Community Center are planning to close its doors less than two years after it first opened in south Jamaica, Queens.

"Although they are reluctant to [make] the decision that was made, there is no other option ... Right now we are out of money and we're not sure if the center will be opened this coming February," said the center's executive director, Anthony Anderson, who has volunteered since the center first opened. "It takes $60,000 a year for us to operate the center. No one gets paid, everyone volunteers. Everything is a cost here, because we have to pay rent, electricity bills, and buy school supplies for needy children."

Sean Bell was at his bachelor party in November 2006, when he was killed by a group of NYPD officers outside of a Jamaica strip club. Police fired 50 bullets at Bell after they claimed someone in his group had a gun. While the U.S. Department of Justice has declined to prosecute, saying there was insufficient evidence to proceed, Bell's shooting led to numerous protests and civil rights groups demanding justice.

William Bell, Sean's father, still grieves the loss of his son and said there is a need to have a center in his late son's name because he was well-known in the community. "He didn't have to die that way. He didn't deserve to get 50 bullets," he exclaimed. "He was a person who cared about others, so my wife and I wanted to do something that can have an impact on the community and also to keep his name alive."

According to Anderson, the money to open a center in Sean Bell's name originally came from a $196,000 Community Development Block Grant that was first suggested to the community by Sen. Charles Schumer and was awarded by the U.S Department of Housing and Urban Development a year after Bell was killed. As the money ran out, the center was originally expected to be closed at the end of December 2012. Monetary donations were made by the Springfield Community Church, in Springfield Garden, which kept the center's doors open through January of this year, but now even that is running out.

The Rev. Phil Craig, pastor of the Springfield Community Church and Queens chapter president of the National Action Network, said, "At the town hall meeting in early December, residents expressed their concerns toward the closing of the Sean Bell Center ... I then decided that we could have a special service at the church where we could raise money for the center. It turned out very well.

"Reverend Al Sharpton was the guest preacher and he too has pledged money."

Craig said his determination to help came from his belief that "churches should be the cornerstone of our community."

The senior Bell, who volunteers at the center, said that he is also disturbed over the fact the center is in jeopardy of closing.

"That is not I want to see happen. I'm trying not to anticipate it either," he said. "Before the center was established, you had many persons in this community who couldn't afford to buy clothes or food. We provided these things for them. This is not about us. It is about the community and those out there who are in need of help."

Since its establishment in May 20, 2011, the center has provided a free computer literacy program for all ages, a job readiness and referrals program, dance classes and an after-school and mentoring program. On the list a few months ago was a free GED program, but the administration stopped offering it due to limited funding. However, despite the obstacles the center now faces, it continues to serve as a safe haven for residents in the predominantly African-American community.

Alicia Lloyd is a resident of the community who also volunteers at the center. She says she is one of the hundreds of residents who have benefited from the center.

"When I came here, my husband and I told them our problems. They helped and encouraged us," said Lloyd. "Literally when you see Mr. Bell open the gates, people in this community feel safer. I've seen people across the street watch others walking inside for help. I've seen them looking with a smile on their face. But I'm not even thinking about the closing. I'm just holding onto my faith."

It was because of that help that Lloyd then decided to give back to the center as an act of appreciation.

Both Lloyd and Craig said that they see the center as an essential outlet that fosters self-empowerment and community development, and which also helps to keep individuals, especially young African-American males, off the street.

Craig said that he and his church will continue to support the center in any way possible. Carl Clay, executive producer of the Black Spectrum Theater Co., is planning a fundraiser in February at the theater located in Jamaica. Local officials, including City Councilman Leroy Comrie, have promised to help. Likewise, Andrews said that although the center applied and did not receive funding last year, he is planning on applying for discretionary funding from City Councilman Ruben Wills again.

If you would like to make a donation to the Sean Elijah Bell Community Center, you can contact administrators at 718-291-3512 for more details.