Harlem School of the Arts renamed after donor Herb Alpert 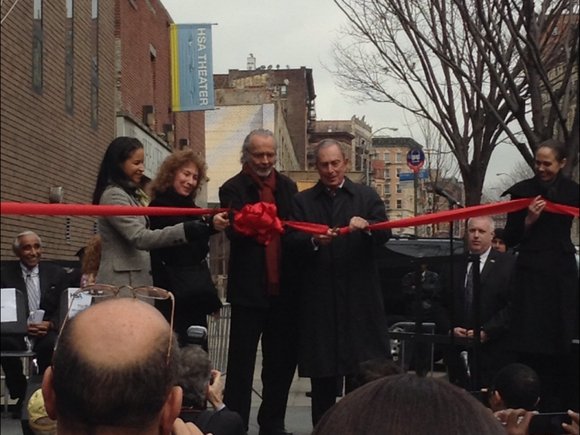 Harlem School of the Arts renamed after donor Herb Alpert

Monday began the dawn of a new era for the Harlem School of the Arts. Herb Alpert, entrepreneur, music legend and co-founder of A&M Records, was honored at a renaming ceremony of the school, which is now the Herb Alpert Center.

Alpert and his wife, musician and Grammy award winner Lani Hall, were honored for their contributions to the school.

Over a course of three years, the Herb Alpert Foundation has generously donated $6 million in grants to the financially troubled school, which closed briefly in 2010. Because of this donation, the school is now able to keep its doors open for years to come.

"I wouldn't be standing here if it wasn't for the elementary school I went to," said Alpert. "When I was 7 years old, there was a music appreciation class. There were a bunch of instruments on the table and I happened to pick up the trumpet. That trumpet has changed my life dramatically and opened so many doors."

Alpert also said that he is very proud to have his name associated with this community. "I just hope to keep arts alive," he said.

Located at 645 St. Nicholas Ave., the Harlem School of the Arts was founded in 1947 by opera singer Dorothy Maynor.

The school has 700 young people between the ages of 2 and 18 currently enrolled for this semester, along with some adults. The school also serves 2,700 students in the New York City public schools through music, dance, theater, visual arts and musical theatre.

"Today is a landmark moment in our history, as one of this nation's most valued arts institutions is experiencing a rebirth," said President and CEO Yvette L, Campbell, who assumed leadership of the Harlem School of the Arts in 2011.

"Imagine what the world would be like if Herb Alpert had not picked up a trumpet," Campbell said. "Because of your generosity and the vision of the Herb Alpert Foundation, the future of the arts education in Harlem is secured for generations of students."

Campbell also told the AmNews that the renaming ceremony was just the beginning. "We are trying to renovate the whole building so that it becomes an inspiring space for inspiring lives," she said.

"The idea is to make the community a part of that reality," she added. "This building is 34 years old. It needs a little love." The official announcement for the renovation campaign will be launched in 2014 for the school's 50th anniversary.

Mayor Michael Bloomberg, who helped to arrange a new board to assist the school's executives and helped get multiple donors for the school, presided over the ceremony.

"Today we are celebrating Herb Alpert's incredible gift and all he's done for the Harlem School of the Arts," said Bloomberg. "His vision and generosity will be remembered each time students walk through the doors to take a art class, learn an instrument and express their inner creativity."

Bloomberg also added that he is confident that the best days for the Harlem School of the Arts are still to come.

Rep. Charles Rangel thanked Mr. and Mrs. Alpert for "recognizing Harlem for being Harlem." He also recognized Bloomberg for his efforts in helping to revive the school. "Mr. Mayor, even though you are term-limited, I'm confident that your generosity is not term-limited."

Before singing "Defying Gravity" from the musical "Wicked," singer and performer N'Kenge said, "When I came to the Harlem School of the Arts, I was told to strive to be the best, to work hard and to dream big." N'Kenge started attending the school at the age of 3.

Campbell's advice to any young person interested in the arts is to be passionate about it. "It has to be about who you are as a artist and you have to drive for it, regardless of if anybody believes in you," she told the AmNews.

Campbell wants people to know that the Harlem School of the Arts is back and better than ever.