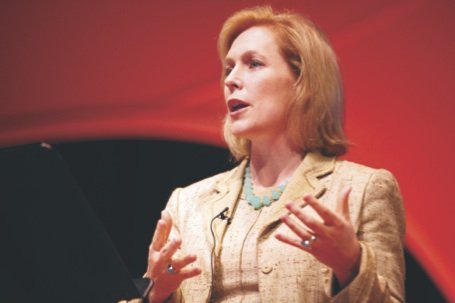 And then there were 20

New York State's own Sen. Kirsten Gillibrand has been chosen to chair the Senate Armed Services Subcommittee on Personnel hearing examining sexual assault in the military. The hearing, which started last week, is the first in the Senate in nearly a decade and includes testimony from victims of military sexual assault.

"I know that all of our colleagues on the Armed Services Committee share our deep commitment to improving the quality of life of the men and women who serve in our all-volunteer force on active duty or in the National Guard and Reserves, [as well as] their families, military retirees and Department of Defense Civilian personnel," Gillibrand said." And that is why this hearing today is so important to me personally ... and to thousands of service members ... and their families across the country."

While sexual assault in the armed forces has been talked about for years, the issue recently gained attention thanks to the Oscar-nominated documentary "Invisible War." The documentary features interviews from women from several branches of the military who experienced rape and claim they had little or no help from Armed Forces officials.

According to the Veterans Health Administration, over 108,000 veterans screened positive for military sex trauma in 2010. Nearly 70,000 had at lease one outpatient visit for sex trauma. An estimated 19,000 assaults are believed to have occurred, but there were only 244 convictions. Currently, the service branches have varied policies when it comes to processing a report and punishing a convicted sex offender.

A report by the "Psychology of Women Quarterly" reveals that some evidence suggests that Black women in the military are more likely to experience more severe forms of harassment--including unwanted sexual attention and sexual coercion--than that experienced by their white women counterparts.

Among the witnesses who are testifying are female sexual assault victims who are telling detailed stories about what happened to them.

Anu Bhagwati is executive director and co-founder of the Service Women's Action Network. She is a former captain and company commander serving as a Marine officer from 1999 to 2004. While serving, Anu faced discrimination and harassment in the military and has borne direct witness to the military's handling of sexual violence.

At the age of 18, BriGette McCoy was sexually assaulted by a non-commanding officer while stationed in Germany from 1988 to 1991. She initially did not report the incident and later was sexually embarrassed. McCoy then reported the assault to her non-commissioned officer, and she faced retaliation from other officers and a sergeant. Her attacker went unpunished.

"We need to take a close look at our military justice system, and we need to be asking the hard questions with all options on the table, including moving this issue outside of the chain of command so we can get closer to a true zero-tolerance reality in the Armed Forces," Gillibrand said.