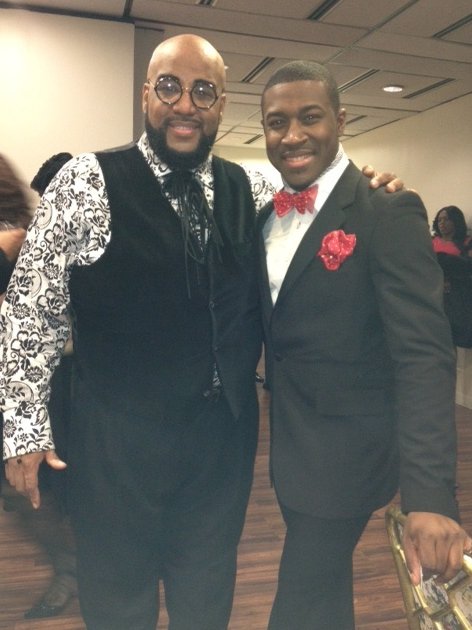 There was a feeling of an anointing in the air on Saturday, March 23, as celebrities arrived on the red carpet at the Dempsey Theatre for the 30th anniversary celebration of "Mama, I Want to Sing." The production marked exactly 30 years that evening. Celebrities and local public officials who attended included Dionne Warwick, Valerie Simpson, Emily Sissy Houston, Hinton Battle, Chuck Jackson, Rep. Charles Rangel and Councilwoman Inez Dickens.

Inside the building, young people beautifully dressed in black with red accents lined the hall, welcoming those arriving and wishing them a good time. The air of anointing continued into the filled-to-capacity theater--an anointing that accompanied this particular production because it is "God-centered" and encourages audiences to openly "give God the glory!"

This was an audience of all races and nationalities. Some seemed to be churchgoers as they clapped, shouted and praised God in response to the amazing performances throughout the evening. There was a strong feeling and sense of brotherhood in the room. It didn't matter your religion. It was obvious that everyone believed in the beauty and godly message of "Mama, I Want to Sing."

This production was co-written by Vy Higginsen and her husband, Ken Wydro. It has a rich history in the Harlem community. Everyone in the theater was clearly aware of the work that Higginsen has done with the show and with the Mama Foundation for the Arts, her nonprofit foundation in Harlem that strives to teach generations of young people about the history of Black music and instill in them an appreciation for it.

The Mama Foundation for the Arts also gives them a vehicle in which to perform through its Gospel for Teens program, a program for 13- to 19-year-olds that was featured on "60 Minutes," in an Emmy Award-winning segment conducted by Lesley Stahl.

On Saturday evening, you could feel the love in Higginsen's heart as she addressed the packed room and thanked everyone for their support over the last three decades. She thanked the audience and named various corporations, including AARP and the New York Amsterdam News, for their support of this production. Higginsen stood at that podium as the proud mother of this theatrical baby, whose life has lasted a record 30 years and seems to have no end in sight. She originally wrote the show as a tribute to the life, struggles and accomplishments of her sister, the late Doris Troy, who was a preacher's daughter who dreamt of success in the music business, and had to struggle to go from being a church singer to singing secular music.

Higginsen also used this production as a vehicle to showcase her sister's talents and had her actually star in the musical in the role of their mother from 1984-2000. "Mama, I Want to Sing" has inspired, entertained and taught life lessons to families for years. Audiences have come to know the production as one that is appropriate for all family members to view together.

Higginsen presented a very flowing program. She gave the audience selections from "Mama, I Want to Sing," "Mama, I Want to Sing: The Next Generation" and scenes from her other production, "Sing Harlem Sing!" In between, she made award presentations and acknowledged the celebrities and politicians in the auditorium.

"Sing Harlem Sing" is a musical production that celebrates the history of Black music and offers gospel and R&B numbers. It uses many of the cast members from "Mama I Want to Sing" to bring classic songs to life. And both these shows are still playing at the Dempsey Theatre.

Knoelle Higginson presented an award to Tyrell Osbourne, a former Gospel for Teens member who completed the program, came back and is now a music master. Vy Higginsen presented Stahl with the Vision Award for her journalistic work and her support of Gospel for Teens. Higgensen then brought out Myrna and Freddie Gershon, the sponsors of the entire evening's event, and shared that they donated $30,000 to Gospel for Teens after seeing the "60 Minutes" piece. The Gershons support numerous programs that bring the arts to young people.

Freddie Gershon humbly shared, "We don't have children. All we want as our legacy is to know we left the world a better place."

Gospel for Teens members took to the stage and the aisles, performing an animated and splendid rendition of "Joshua Fought the Battle of Jericho." They followed this up with "Go Down Moses." The program ended with Knoelle Higginson, members of "Mama, I Want to Sing" and celebrity guests like Houston, Simpson and Warwick coming to the stage. Everyone was then invited to sing "This Little Light of Mine," and everyone had the chance to definitely "let it shine."

As if the evening was not phenomenal enough, after the performance, the audience went to the State Office Building for dinner for food provided by Harlem restaurants such as Chez Lucienne, Make My Cake, Melba's Restaurant, Red Rooster Harlem, Spoonbread, Sylvia's Restaurant, Corner Social and Jacob Restaurant Soulfood.

For more information on the Mama Foundation for the Arts and its productions, visit mamafoundation.org.