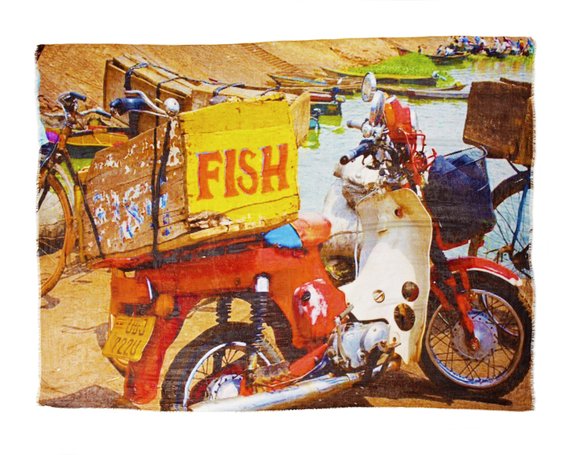 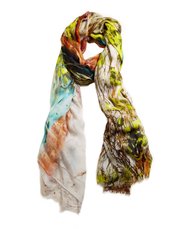 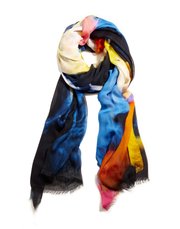 Sheila Johnson's spring 2013 collection captures the spirit of spring with beautiful print pieces. Themed "Contes: An Account of a Woman's Journey," it features images that Johnson took from Haiti, Rwanda and Uganda. Each scarf has a compelling and unique story.

Imagine a woman in the Ugandan sandal market who only makes one dollar a day but hopes to have her own shop one day. There are also the Haitian artists who painted their stunning artwork on scrap metal from the earthquake. After their artwork is transferred to fabric, it is created into simply beautiful scarves. A portion of the proceeds will benefit the Haiti Artisan Project, a division of Donna Karan's Urban Zen Foundation.

Inspired by the world around her, Johnson digitally prints her beautiful photography onto her luxurious Italian-made scarves. She transforms her photographs into wearable art and affordable luxury pieces. As seen through the lens of her camera, Johnson uses rich, vivid colors to capture the joy, peace, beauty and hope of her images. Launched in November 2012 with a Holiday 2012/Resort 2013 season, the collection is manufactured in Prato, Italy and made of 100 percent modal.

Sheila Johnson's business career began in the entertainment industry, where she co-founded the influential BET Network. Today, Johnson works as a prominent film producer, most recently producing "The Butler" (scheduled for release in 2013; directed by Lee Daniels and starring Robin Williams, Oprah Winfrey, Forest Whitaker and Jane Fonda and others).

As founder and CEO of Salamander Hotels & Resorts, Johnson oversees a growing portfolio of luxury properties, including the new Salamander Resort & Spa, opening in Middleburg, Va., in 2013. She is also the owner of three professional sports teams in Washington D.C.--the Wizards, the Mystics and the Capitals. Additionally, Johnson serves as chair of the Board of Governors of Parsons: The New School of Design, where she funded both an award-winning design center, the Sheila C. Johnson Design Center, and a scholarship for talented but underserved students.

These prints, retailing for about $475, are available at select Neiman Marcus stores, at www.sheilajohnsoncollection.com and at several New York City specialty boutiques.