State of emergency in Nigeria ramps up "terrorist" war 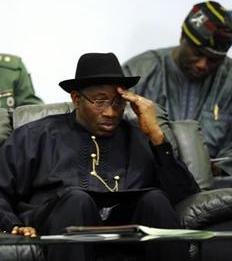 State of emergency in Nigeria ramps up "terrorist" war

In a letter addressed to compatriots, he wrote: "The activities of insurgents and terrorists have been reprehensible, causing fear among our citizens and a near-breakdown of law and order in parts of the country, especially the North...

"Already, parts of Borno state have been taken over by groups whose allegiance is to different flags and ideologies," in an oblique reference to the Nigeria-based Boko Haram Islamist movement and its growing support network beyond national borders.

"The Chief of Defense has been directed to immediately deploy more troops to these states to take all necessary action..."

The President has been in an unpleasant spotlight as attacks by insurgents and retaliatory mop-up operations by the military have soared to new levels. Most recently, his own forces were blamed for a massacre in the town of Baga during which some 2,275 homes were set afire and close to 200 citizens shot in cold blood.

The latest incident, in a fishing village in Borno state, saw at least 187 people killed and there are allegations that soldiers are responsible.

But the announcement of an increased military presence has unsettled many leaders in the Islamic northern states which is also home turf of Boko Haram.

A letter from 36 governors in the Nigeria Governors' Forum begs the President to reject the order. "The ongoing agitation for a state of emergency is made by people who do not wish our country well and are bent on plunging the country into a deeper crisis."

Aliyu U. Tilde, in a commentary published by SaharaReporters.com, added: "Goodluck Ebele Jonathan has just bought another state of emergency from his security chiefs. He thinks it will work. I think it will not.

"If despite the resources, the personnel, government has lost 87% of the territory to Boko Haram, I wonder what additional powers to the military would achieve.

(With) the mass deployment of soldiers to the affected areas (and) the sophistication of Boko Haram, our sons in the military will just be turned into cheap targets. There will be so many of them to aim at easily, more to destroy in a spot."