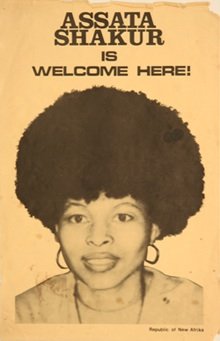 Activists are keeping up the efforts to maintain the "freedom" of political exile Assata Shakur with a teach-in and film screening at the Harlem School of the Arts (645 St. Nicholas Ave.) on Wednesday, June 5 at 6:30 p.m.

After the Obama administration announced this May 2 its placement of her on the FBI's Most Wanted Terrorists list and upped the ante for her capture to $2 million, many expressed their discontent.

"The U.S. labels anyone who fights for freedom a terrorist," determined scholar and activist James Small. "The declaring of Assata Shakur a terrorist is an act of racism on the part of the FBI and the State Department. Obama should be ashamed to allow his office to be used in such a manner. What we live in is a terrorist, fascist state masquerading as the U.S.A."

During the turbulent Black Power era, Shakur (aka Joanne Chesimard) advocated community control and self-determination for Black communities and was known as the soul of the revolutionary Black Liberation Army.

After the May 2, 1973, ambush by state troopers on the N.J. Turnpike, which caused the deaths of her comrade Zayd Shakur and a trooper, Assata was arrested, convicted and sentenced to life in prison by an all-Caucasian jury, although forensics determined she hadn't fired a gun.

On Nov. 2, 1979, some courageous comrades heroically sprung Shakur free from prison, and she found political asylum in Cuba.

Some find the timing of the FBI's announcement peculiar: just weeks after the Boston Marathon bombing and on the second anniversary of Osama Bin Laden's alleged assassination by U.S. forces.

"The attempt at this point by the New Jersey State Police to characterize her as a terrorist is designed to inflame the public and to put pressure on the Cuban government," indicated Shakur's longtime attorney, Lennox Hinds.

Social critic La Meh Nua contends: "[The U.S.] just marked her and declared war on Cuba, disregarding their laws by promoting her kidnapping for a ransom. What if Iraq, Afghanistan or Pakistan invaded America to charge [George W.] Bush and Obama with terrorism for genociding their countries? They can find $2 million for a 40-year-old case but can't educate or feed the poor?"

Some say that the recent intensified interest in the 66-year-old serves to criminalize one of the most successful campaigns for freedom in recent memory.

"It seems to me that this act incorporates or reflects the very logic of terrorism," added fellow Black Panther Angela Davis. "I can't help but think that it's designed to frighten people who are involved in struggles today."

Small added, "I haven't seen them declare the KKK or the skinheads as terrorists."

Shakur once wrote, "I am a 20th century escaped slave. Because of government persecution, I was left with no other choice than to flee from the political repression, racism and violence that dominate the U.S. government's policy towards people of color."

This event is part of a national week of teach-ins on Shakur's life and struggles.

For more information, visit www.assatashakur.org. You can find the Hands Off Assata petition at www.change.org/petitions/hands-off-assata-shakur.