Court victory too little, too late for Interfaith? 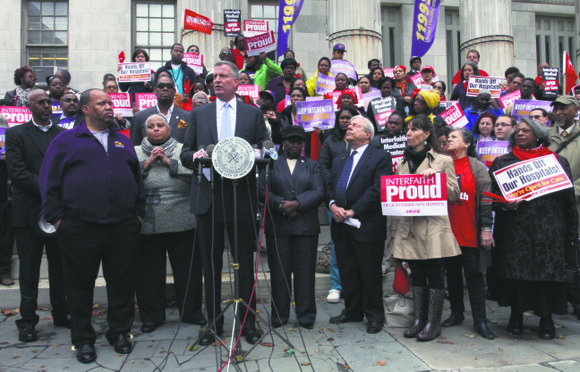 Interfaith Medical Center’s (IMC) advocates won a major battle in court on Monday, but the victory could ring hollow.

A federal bankruptcy judge granted a temporary adjournment to supporters of IMC, who are suing to keep the hospital open. But that same judge remained skeptical that the delay would solve the problems its advocates face with finding someone to take over the at-risk facility.

“If there was going to be a white knight, why wouldn’t there have been one already?” asked Chief Judge Carla E. Craig.

During a rally at Brooklyn Borough Hall last Friday, New York City Public Advocate and Mayor-elect Bill de Blasio called for the judge to grant a month-long adjournment so IMC advocates can come up with a viable plan to avoid bankruptcy.

“You can’t close the hospital without listening to the voices of the community,” said de Blasio on Friday. “There are solutions available.”

A coalition made up of doctors, the New York State Nurses Association (NYSNA), unions like 1199 SEIU and community boards were conducting a “community assessment in order to determine the right course of action for the IMC.

Jill Furillo, executive director for the NYSNA, said that IMC’s presence is needed in underserved communities.

“A judge has ruled that Interfaith must be kept open until we figure out what are the health care needs of the community,” Furillo told Capital New York. “This has to happen before we ‘burn down’ the existing facilities, especially in underserved communities like those served by Interfaith.

“If Interfaith closes, it will have a very dire effect on the community,” continued Furillo. “Many people could die, we will lose psychiatric services, and the hospitals surrounding Interfaith will be impacted.”

Part of the solution is becoming more apparent as Kingsbrook Jewish Medical Center has signed a Memorandum of Agreement that would allow the East Flatbush-based teaching hospital to manage Interfaith’s clinics and urgent care centers. However, the hospital itself would close unless another partner was willing to take over operations, an outcome some community advocates, and de Blasio, feel is unacceptable.

In August, the AmNews revealed that court papers showed that IMC requested bankruptcy proceedings begin as soon as possible. The New York State Health Department rejected a restructuring plan and refused financial help until Interfaith began its shutdown process. Initially, bankruptcy proceedings were to be held on Aug. 15 in United Stated Bankruptcy Court in the Eastern District of New York. As part of the schedule, when approved, closing calls for inpatient admissions would end this week and the emergency room would close on Sept. 14 once ambulances were diverted. Inpatient services and outpatient services would be done by the middle of October, and the process would begin with the closing of the rehabilitation centers on Nov. 14.

“For both LICH and Interfaith, solutions are available,” said de Blasio on Friday. “We just need the courts to give us time to get to these solutions. The courts have said consistently that we can’t close hospitals without considering the effect on the community,” said de Blasio.