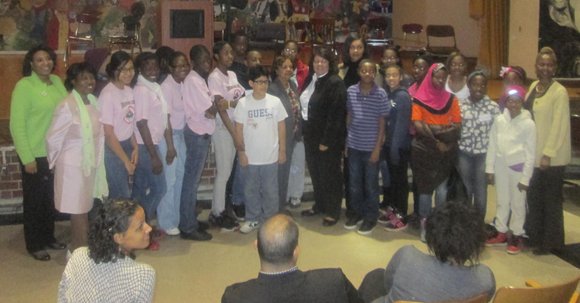 The EYL summit brought together over 100 girls and boys as well as their parents from the Harlem community to provide awareness sessions in science, technology, engineering and mathematic (STEM) education in an effort to enhance the students’ study and career interests. The day consisted of hands-on workshops, one-on-one discussions with STEM professionals and a key note address by Dr. Ray Ann Havasy, who has been a scientist, educator, district-wide science coordinator, middle school principal and nonprofit business executive for over 20 years. In 2010, Havasy was named one of New York’s “50 Most Influential Women.” This summit was free and open to all students in grades six through eight.

Chapter Presidents Doris Mitchell and Angela Butler emphasized that Alpha Kappa Alpha Sorority is an international service organization that was founded in 1908 on the campus of Howard University in Washington, D.C. It is the oldest Greek lettered organization founded by African-American college-educated women. The Tau Omega chapter was established in 1925 and is the oldest graduate chapter of Alpha Kappa Alpha in the New York metropolitan area. The Pi Kappa Omega chapter was established in 1986.

EYL, a four-year mentorship program, is a signature program of the sorority. The program objective is to encourage high scholastic achievement through leadership, educational enrichment, civic engagement and character building for girls in grade six through eight. The EYL summit is a culmination of the academic and leadership work done over the last three years. The EYL local chairmen are Ruth “Cookie” Jean, Amber Johnson and Sharon Cook.