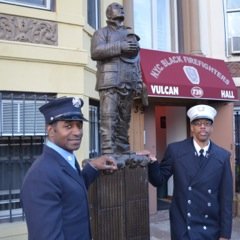 The Vulcan Society, the fraternal order of Black firefighters, held its annual memorial service at St. Philip’s Episcopal Church in Brooklyn this past weekend. The ceremony remembered and paid homage to the brave, fearless Black firefighters who devoted their lives to the call of duty. Family and friends stood inside the church as uniformed Vulcan members marched up the aisle during the processional, followed by the honor guard and renditions of the national anthem and “Lift Every Voice and Sing.”

“We are here to honor those Black firefighters that served with honor and dignity. We remember them in a light that is uplifting,” said Vulcan President John Coombs. “As it was taught to me, I relay to you by leading through service. When you are in the business of service, you do what you have to do. It is not a job. It is not a task. You do it with passion, with love.”

Coombs noted that not all of the names of the Black firefighters read during the necrology were Vulcan members, but included fellow firefighters acknowledged by their peers, friends and families for their service. Some were recognized for giving their lives while on the job.

The Vulcan Society is the oldest organization of Black firefighters in the country. The organization was founded in 1948 by the first African-American battalion chief, Wesley Williams, who was also remembered at the observance. Capt. David Floyd, who passed in 1997, was among the hundreds who were memorialized.

“I remember as a child growing up coming to the Vulcan Hall and watching my father conduct classes for Black firefighters studying for promotional exams,” Andrea M. Floyd, his youngest daughter, told the AmNews.

David Floyd, a former Vulcan president, was one of the first Black firefighters to work in the FDNY elite rescue company and one of the founding members of the International Association of Black Professional Fire Fighters. “My father believed that it was necessary to give one-on-one attention to help those who needed it. I am proud to honor him,” Andrea Floyd said.

There were other testimonies that spoke to the impact made by these Black heroes of the FDNY. One came from a firefighter who is forging her own legacy. A member of the first class of firefighters to include women in 1982, firefighter McNair is 5-feet-6-inches and 155 pounds of perseverance. Now retired, she worked at Engine Company 283 in Brownsville, Brooklyn, and is the first Black woman firefighter with the rank of lieutenant.

“The memorial meant so much to me. Some of the people we remembered were my mentors who helped navigate my course through the job. They were the ones who helped make this job easier for me. When I needed a shoulder to lean on, they were there for me,” she said. “I joined the Vulcan Society immediately after I graduated from the academy. I wanted to rise among the ranks of the department. This organization has supported me through all of my issues on the job. It is very special to be a member of the Vulcan Society.”

After the service, there was an unveiling of a memorial statue at Vulcan Hall in Brooklyn commemorating the 343 firefighters who died in the World Trade Center tragedies. Twelve were Black.