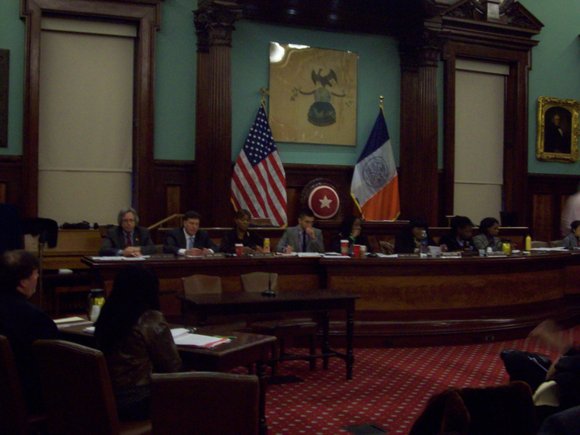 The City Council's Committee on Civil Rights and Committee on Oversight and Investigation held an oversight hearing on the recent allegations of racial profiling at Macy's and Barney's.

Panelists from various civil rights organizations and city agencies gave testimony on ways to investigate and end the practice that has been labeled “shop-and-frisk.” Recent media reports have outlined several Black shoppers being racially profiled at Macy's and Barney's after making legit purchases.

Barney's and Macy's were no-shows at the hearing but sent letters that were read aloud. Both retailers maintain that they had nothing to do with Black customers being stopped and detained by NYPD officers. The NYPD did not attend or testify at the meeting.

“The breath of this problem is staggering,” Williams said. “It is so common that people have come to expect this type of treatment. We are living in a society where if you are young and Black it is assumed you can't afford to shop in a high-end store."

Speaking about the racial discrimination settlement that Macy's had to pay in 2005, Rose said that she was upset by the situation and still wants answers.

“This is not a one-time issue but a reoccurring one. I remember hearing about that settlement in the news and hoping things would change. Things are worse,” she said.

Among those who testified before the City Council were the Rev. Al Shapton, Kirsten Foy and Calvin Hunt from the National Action Network, Donna Lieberman of the New York Civil Liberties Union and Bertha Lewis of the Black Institute.

“We've been down this road and now we've been betrayed,” Sharpton said. “There is no way these instances could have happened without collaboration in the store.”

Also giving testimony was the city's Commission on Human Rights Commissioner, Patricia Gatling. She said since 2002, 150 people came to the commission complaining that they have been racially discriminated against at New York City retail stores.

The complaints were not about arrests or detention but rather being treated badly. The cases resulted in $134,000 in fines to the city and damages.

Gatlin sent letters to 17 CEOs of some of the City’s larger retail stores requesting information about their loss prevention policies, procedures for approaching and detaining individuals suspected of theft, records regarding all individuals accused of theft in the past two years, and what, if any presence NYPD officers have in the retail locations.

The CEOs have until Friday to send the information or subpoenas will be issued.