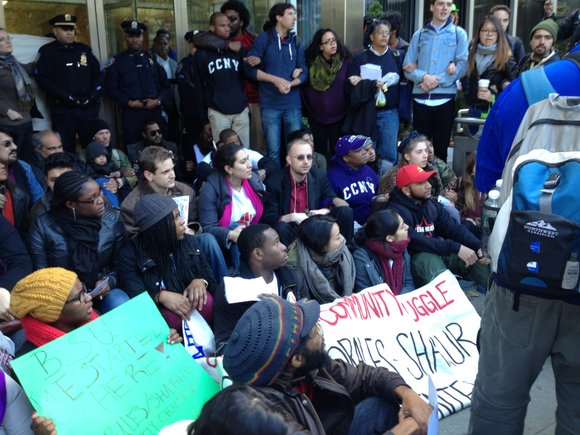 “Students like Khalil and Tafadar were hoped for, dreamed of and prayed for by people suffering under slavery,” said Ron McGuire. “I’ve been doing this for 25 years, as a lawyer, and I have never seen the kind of repression that has fallen upon them.”

On Tuesday, McGuire, a former City College (CCNY) student who helped organize the CUNY student strikes in 1964, represented Khalil Vasquez and Tafadar “Taffy” Sourov in Manhattan Criminal Court as they were arraigned on charges connected to demonstrations at CCNY.

“What we are seeing at CUNY is, virtually every week, an escalation of repression,” said Sandor John, a professor of Latin American history at Hunter College and a member of the Class Struggle Education Workers.

The two young men were at the heart of protesting many of these escalations. At the beginning of the semester, former Director of the Central Intelligence Agency Gen. David Petraeus began teaching at CUNY’s Macaulay Honors College, and the Reserve Officers’ Training Corps (ROTC) began recruiting students at City College again, after being kicked out by students 41 years ago. In response, Vasquez and Sourov, members of the Revolutionary Student Coordinating Committee, helped to organize the Ad Hoc Committee Against the Militarization of CUNY, which called for demilitarization of CUNY. The group protested outside of Petraeus’ Macaulay Honors College for weeks, forcing CUNY to relocate the class.

Vasquez and Sourov were two of the protest organizers after CCNY shut students and community members out of the the Guillermo Morales/Assata Shakur Community Center, an autonomous space won by students during the 1989 strikes. CCNY has since started the expansion of the school’s career center into that space in order to provide a space for corporations looking to recruit students. It was while protesting this move on Oct. 24 that Vasquez and Sourov were involved in the incidents that the university claims led to their suspension and criminal charges.

In late October, the CUNY board of trustees released a proposed “Policy on Expressive Activity.” The policy is “an attempt to silence dissent and stifle protest before it starts,” according to the Professional Staff Congress, which represents educational workers at CUNY.

Both students also face expulsion from CCNY, and according to McGuire, both were initially indefinitely suspended without a hearing. After legal pressure was applied, the administration afforded them a hearing, and their lawyers made a motion for it be open to the public. A room has been opened for 20 people to attend the hearing on Nov. 22, and lawyers say that while the space should be much larger, campus security has forbidden a larger audience.

“I was expelled, and we never had this level of security, the level of paranoia, when it was white students,” said McGuire. “They’ve never had a situation where security is dictating to the college what they can and can’t do. There has been a military coup within CUNY.”

“Pre-empting its own student disciplinary process, which has yet to run its course for Taffy and Khalil, CUNY brought in the cops and the district attorney to punish these two student activists. This represents a heightening of collaboration between CUNY, the NYPD and the National Security State,” reads a statement from the Morales-Shakur Coordinating Committee.