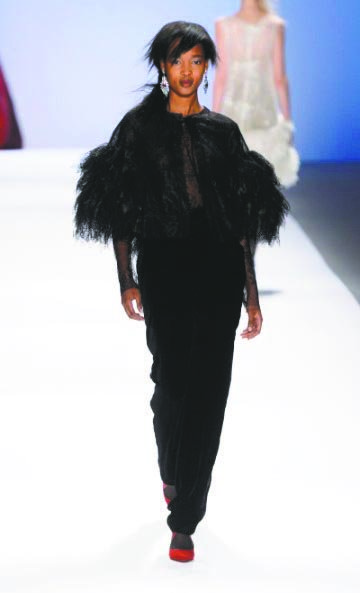 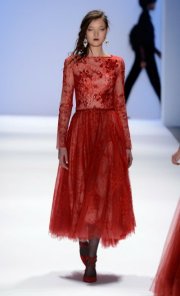 Tadashi Shoji’s fall 2013 collection tells a tale of exiled nobility. His looks were inspired by the splendor of the Russian Empire. The journey begins in St. Petersburg, Russia, impressively shrouded in the darkness of winter.

This season, Shoji invites you to travel back in time to wintertime in Russia to explore an age of grandeur and to immerse yourself in a collection inspired by an enchanting, dynastic past. This collection is beautiful. Rich colors and fabrics resemble the clothes of royalty.

The resplendent Winter Palace shone brilliantly against the shadowy backdrop of a darkened sky. It was a time fraught with turbulence. Exiled royalty, disguised in peasant clothing, fled Siberia. Influenced by this escape, this collection marries aristocratic style with folkloric details. There are rich silks and cut velvets. These pieces are paired with soft silhouettes and traditional embroidered patterns. Precious gems are veiled with gossamer layers of tulle, while heavily embroidered lace is encrusted with pearls. 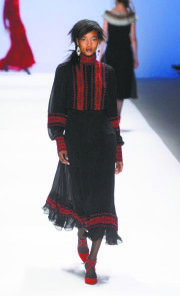 Shoji is the founder and chief designer of the Tadashi Shoji collection. Born and raised in Sendai, Japan, he began painting and drawing from a young age before eventually moving to Tokyo, where he studied fine art. His talent was recognized, and he was recommended for an apprenticeship with one of Japan’s leading contemporary artists, Jiro Takamatsu. During the 1960s, he became intrigued with New York and its role in the contemporary art scene. He moved to the United States to attend the University of Los Angeles and further his artistic development.

Today he shows his line seasonally at the Mercedes-Benz Fashion Week in New York. His clothes are available at Neiman Marcus, Nordstrom, Saks Fifth Avenue, Bloomingdale’s, Macy’s and Lord & Taylor. Internationally, the brand is also available at Vakko, Harvey Nichols and Rustan’s.