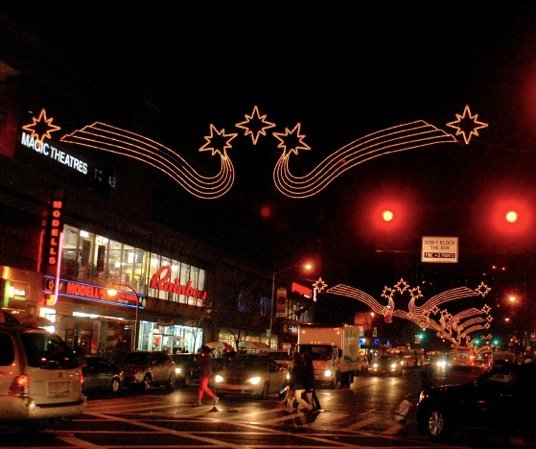 Harlem’s 125th Street is all aglow thanks to the 125th Street Business Improvement District (BID). In an effort to get people to shop uptown this holiday season, the BID flipped the switch on the illuminated holiday favorites.

At an event that took place last Thursday, 125th Street businesses welcomed the holiday shopping season with special sales, music and fun. This year’s event included an outdoor festival and in-store and on-the-street activities, as well as a scavenger hunt, dance party and parade of lights.

This year also marks two significant milestones: 20 years of BID operations and the 200th anniversary of 125th Street being placed on “The Greatest Grid.”

Several businesses participated in the free event, including the Apollo Theater, Carver Federal Savings Bank, Levels Barbershop, the Studio Museum of Harlem and the newly opened Red Lobster. A parade was held to ring in the lighting of 125th Street with WABC 7’s Sandra Bookman serving as grand marshal.

Barbara Askins, president and CEO of the 125th Street BID, discussed with the AmNews what went into putting the lights on and how the organization set to work encouraging people to spend their holiday shopping dollars uptown.

“When we put the lights on 125th Street, we are competing with the rest of the city,” she said. “There is a limited number of contractors. We have to get with the property owners to make sure we can hang the lights on their property and make sure the lights stay on during the wintertime.”

Askins added that the BID met its goal in getting the lights on the weekend before Thanksgiving. This year, there are a few additions to the lights, including two 7-foot snowflakes, one located in front of the Apollo Theater and the other located between Broadway and 12th Avenue. Also, illuminated snowflakes are posted along the corridor.

As the holiday season gets underway, shoppers are encouraged to go to the BID’s microsite, www.harlemlightitup.com, to learn about promotions from stores and businesses. Retailers send in information on promotions and events, which is then announced via the site.

“There are lots of great holiday events, including discounts and promotions,” Askins said. “We really want people to know they don’t have to go downtown to get some great deals.”

Continuing its efforts to engage businesses after the holiday season, the 125th Street BID is launching its campaign “Connect the Dots” in spring of 2014. The campaign is the result of a collaboration with marketing directors of businesses and involves using social media to aggregate existing offerings on 125th Street.