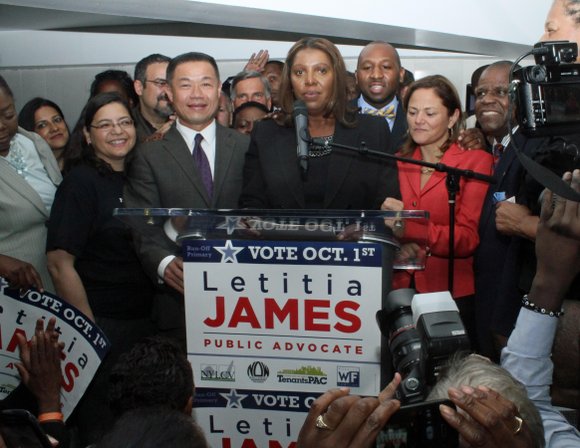 Flanked by Comptroller John Liu and City Council Member Melissa Mark-Viverito, James fought back tears as she thanked her supporters and detailed her rise to the position despite the many mainstream liberals and daily newspapers that didn’t hold her in high regard.

Along with Schumer, Squadron received endorsements from the New York Post, The New York Times and the New York Daily News. All three papers’ Democratic and Republican mayoral endorsements during the primaries never made it to the next level either.

For an office that some have called “meaningless,” the Democratic primary and runoff for public advocate sparked significant back-and-forth barking between James and Squadron. But despite the heated rhetoric on both sides, Squadron emailed a statement congratulating James on her victory.

“We ran this campaign making the case that the public advocate’s office can be essential to our city—getting results for New Yorkers who need them,” read Squadron’s statement. “For New Yorkers without a voice, without high-powered lobbyists, without City Hall on speed dial. For people with no place else to turn, their families need a strong public advocate.

“And I know that Tish will be their great advocate for New Yorkers across the city,” continued Squadron’s statement. “She ran a great campaign.”

As of press time, the public advocate runoff—which pundits and political prognosticators thought would produce a small crowd of voters—might end up pushing the 200,000 mark, which is a lot more than expected. The race also broke down racially in extreme ways. Black majority districts overwhelmingly voted for James, while white majority districts overwhelmingly voted for Squadron. Districts with no racial majority mostly voted in favor of James.

Public advocate is second in command to the mayor of New York City, and many politicians use the position as a stepping stone to City Hall. The current public advocate, Bill de Blasio, is the favorite to win the upcoming mayoral election. The runoff for an office that has an annual budget of $2.1 million cost the city $13 million to hold.