Fantasia brings it ‘After Midnight’ 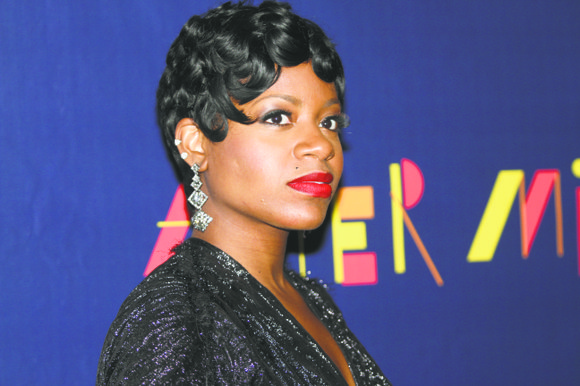 The scene was set. It was Tuesday morning at Dizzy’s Club Coca-Cola, located inside Jazz at Lincoln Center’s Frederick P. Rose Hall. Weather-wise, it was perhaps the last great day of the calendar year. Couple that with a picturesque view of Midtown New York’s beauty during the autumn season, and it was all that was needed for a good day. But no, those were only ancillary components, as things would only get better. “Ladies and gentleman, welcome Fantasia,” said the host. Showtime!

Say what you want about Fantasia, but the one thing that can’t be denied is that she has rare gifts as a vocalist—very, very rare. Certain media types were on hand to witness the event. She bellowed a skin-crawling interpretation of the Lena Horne classic “Stormy Weather.”

The production office has this to offer about the show: “Jazz is a state of mind. It’s a structure for innovation, forward momentum and freedom. The evocative new musical ‘After Midnight’ will take the sexy, smoky glamour of the original Jazz Age and catapult it into a whole new era of heart-pounding, mind-blowing entertainment for modern Broadway audiences.

Seen through a contemporary lens, “After Midnight” will celebrate Duke Ellington’s years at the Cotton Club using his original arrangements, which will be performed by the Jazz at Lincoln Center All-Stars. The timeless tunes, which will be set against a narrative of Langston Hughes poetry, will provide an authentic backdrop for an array of cutting-edge performances by 25 sensational vocalists and dancers, including special guest stars whose interpretations will shatter everything you think you know about music, nightlife and Broadway. Welcome to the new Jazz Age.

Fantasia is the first guest performer, and will appear through Feb. 9, 2014. Following Fantasia will be Grammy winner k.d. lang (Feb. 11-March 9, 2014) and Grammy Award-winning artists Toni Braxton and Kenny “Babyface” Edmonds (March 18-30, 2014). Directed and choreographed by Warren Carlyle, “After Midnight” will begin previews at the Brooks Atkinson Theatre (256 W. 47th St.) on Friday, Oct. 18 and opens officially on Sunday, Nov. 3.

As for this weekend, the Apollo Music Café (Apollo SoundStage, 253 W. 125th St.) presents soul artists Stepaine McKay and Jermaine Paul, winner of NBC’s “The Voice,” on Friday, Oct. 4 and Saturday, Oct. 5, respectively. Tickets are $20, and both shows are scheduled for 10 p.m.

On Monday, Oct. 7 and Tuesday, Oct. 8, Canadian R&B performer Abel Tesfaye, known as The Weeknd, rides his substantial buzz to the Great Stage at Radio City Music Hall. The Weeknd began his career with the anonymous release of a few songs on YouTube in 2010. The following year, he released three critically acclaimed mixtapes, “House of Balloons,” “Thursday” and “Echoes of Silence.” The mixtapes’ songs were remastered and combined with three additional songs to create 2012’s “Trilogy,” which was released under Universal Republic Records and The Weeknd’s own label, XO, and was met with critical and commercial success. In September, his latest album, “Kiss Land,” debuted at No. 2 on the Billboard Top 200.

Raheem DeVaughn comes back to New York City on Tuesday, Oct. 8 at B.B. King Blues Club and Grill (237 W. 42nd St.). Over and out y’all. Holla next week. Until then, enjoy the nightlife.