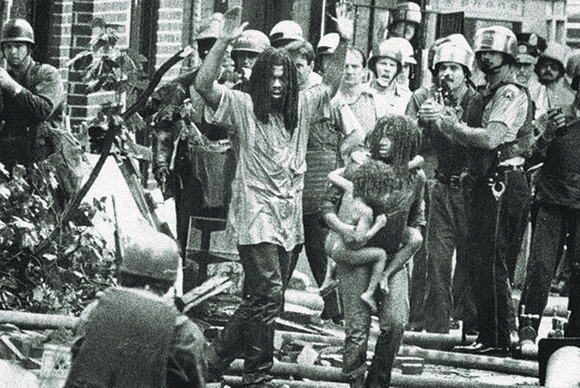 Members of MOVE exit the house firebombed by authorities in 1985.

Other than the Japanese attack on Pearl Harbor in 1941, the U.S. proudly claims it has never been bombed from the air. That may be true to the extent of a foreign enemy conducting such an action, but it doesn’t apply to incidents where U.S. planes bombed their own people, as in the Tulsa Riot of 1921 and in Philadelphia in 1985, when incendiary firebombs were dropped on Move, a back-to-nature group.

Historians are still debating whether Tulsa—and mainly the Greenwood District, or “Black Wall Street”—was actually bombed by six biplanes during a race riot that resulted in the death of a countless number of residents in the vicinity. Almost as controversial as the bombing is the ongoing discussion about what triggered the riot.

According to some accounts, Dick Rowland, a Black man, and Sarah Page, a white woman, either accidentally bumped into each other on an elevator, which prompted Page to scream for help, accusing Rowland of assaulting her, or there was a lover’s quarrel between them, which is less credible given the taboo around interracial relations in the state at that time.

Whatever the cause, the scuffle was the source of three days of conflict between large contingents of well-armed white men and smaller groups of Black men determined to protect Rowland, who had been jailed following the testimony from Page.

The two forces met near the jail, a shot was fired, and the riot was on. Outnumbered by the whites, the Black residents fled to the heart of the Greenwood District, where they sought refuge in Black-owned commercial establishments. This only made their property more vulnerable, and soon the whites in pursuit began to torch the buildings.

When this failed to uproot the Blacks, planes were dispatched by law enforcement officials merely to observe, they stated, what was happening from above. But Black eyewitnesses told a different story. Many claimed the planes dropped incendiary bombs on businesses and homes in the district. When it was over, Black Wall Street, so named because it was a prosperous section of the community, was totally destroyed. Nearly 200 businesses were burned to the ground, hundreds of homes were leveled by the fire and even today it is not known how many people were killed, though the number of fatalities are reportedly as high as 300, with most of them African-Americans.

The blame was placed on the police commissioner, who was relieved of his duty. Rowland, meanwhile, was released from jail and left Tulsa, never to return. Research conducted by this writer in Tulsa, Oklahoma City and Muskogee was futile because a majority of the newspapers that carried accounts of the riot had those stories removed from the papers.

Unlike the Move incident, there is little or no archival footage from the Tulsa Riot, though there are numerous photos depicting the burned-out neighborhood. The archival footage of the raid on Move was recently discovered by a filmmaker who assembled it into a compelling documentary titled “Let the Fire Burn.”

The conflagration was several years in the making and mainly stemmed from residents who were extremely dissatisfied with the lifestyle of Move and its members. With a back-to-nature belief system, they upset their neighbors, particularly due to their reluctance to remove garbage, which created a colony of rats. There was also the subsequent disturbances from loud music in the night, which was part of the group’s protest after they were forced to relocate following a shootout that ended with a police officer killed.

Seven years after this first tragic encounter, the police, again acting on complaints from neighbors, raided the Move house, and a shootout occurred. Later, after being met with firm resistance, Mayor Wilson Goode, who was Black, decided on the use of incendiary bombs to roust them from their fortress. Apparently, little thinking went into the possibility that the firebombs would blaze out of control and spread from row house to row house.

When a relative calm finally occurred, 11 members of Move, including five or six children, were among the casualties. Some 60 homes were burned to the ground. Ramona and Birdie Africa were the only survivors. And for many years, Ramona Africa has been active, along with Pam Africa and the incarcerated Mumia Abu-Jamal, in demanding justice for the bloody attack on Move.

More light is sure to be shed on the incident with the screening of Jason Osder’s documentary, which opens this week at the Film Forum. Watch these pages for a review and possible interview with Osder, the film’s director.