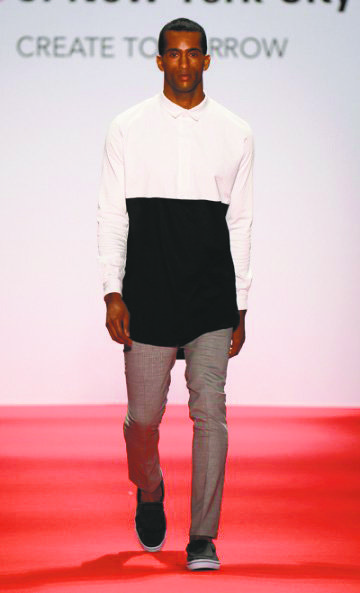 One right after the other, the Art Institute of New York City’s (AI) designers all showed incredible talent and creativity at the spring 2014 Mercedes-Benz Fashion Week presentations. This show was the best and the most surprising. The clothes were glamorous!

It just goes to show you what young New York City designers have to offer. From the looks of this collection, AI’s designers will create much of tomorrow’s designs. This school is definitely one of the institutions to attend in New York City. Ten of their student designers really showed their stuff.

What is style? AI designer Isaiah Isaac believes, “Style is one’s true personality portrayed by personification of their attire. Style is the essence of all that we are, and it’s how we inaudibly express ourselves.” Fashion is simply another way of speaking about oneself. When it comes to fashion, Isaac is a minimalist. His looks are clean, streamlined silhouettes that are combined with strong, fluid attitudes. Isaac is currently on the men’s design team for Macy’s Alfani collection.

Luz Ortiz was born in the Dominican Republic. Her inspirations are not solely born on these shores. She finds great inspiration in the haute couture houses of Italy and France, as well as the art world in general. In the last year, she started a jewelry line for women. In jewelry, she was inspired by her work with Robert Lee Morris. Her pieces are suitable for all occasions. Whether you’re dressing up in her jeans and a T-shirt or wearing one of her evening gowns, you will look totally modern.

Haley Hysong has been sewing since she was 12. While growing up in Indiana, she discovered she had a unique sense of style. Her nude shift dress with contrasting color-blocked trims was sensational. 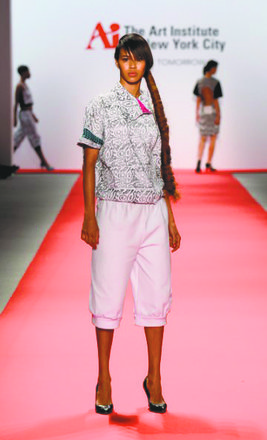 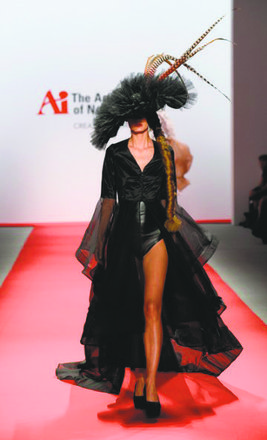 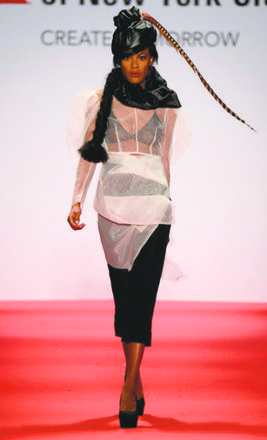 Born and raised in Brooklyn, N.Y., Qutishia Lee said, “A woman has many layers and is never static; she can be a thing of utmost beauty or a raging force of nature, and sometimes even both at the same time.” Her design aesthetic focuses on femininity and modernism. However, she is always mindful that a woman can be graceful as well as powerful.

Born in California and raised in New Jersey, Darhel Anthony draws inspiration from natural gifts to fashion in the form of textiles. His looks show a sharp contrast with contemporary architecture. Anthony created a tailored men’s and women’s collection that utilizes his artistic skills.

Diana Sanchez was born in Cali, Colombia. She came to the U.S. when she was 16. Her American dream is to find a career in fashion. Her natural linen leather-trimmed crop top with the voluminous, faded, indigo, linen trouser skirt was a winner.

I.J. Park, hailing from Busan, Republic of Korea, was drawn to fringe, leather and metals. Most recently, he has been exploring the techniques that are involved in draping knitwear.

Josimar Torres, born in Puerto Rico, has a strong affinity for Korean pop music. Torres has always been fond of art. She approaches life with wide-eyed wonder every moment of the day. Her white ventilated top with a black kimono and black jersey draped short was stylish and received applause.

Michael Doyle stole the show. Born and raised in Massachusetts, where he worked as a carpenter until the age of 24, he was first drawn to the fashion business by the theatrics of Alexander McQueen and Viktor & Rolf. For spring 2014, Doyle focused on voluminous proportions that drape to explore the range of hard to soft. He enjoys playing with silhouettes and volume to create a discernible aura for each show he creates. In this show, it was the headgear, which ranged from a feather to wide-brimmed hats. In his works, “Fashion is theater.”