‘A Lighthouse in NY’ at the Shomberg 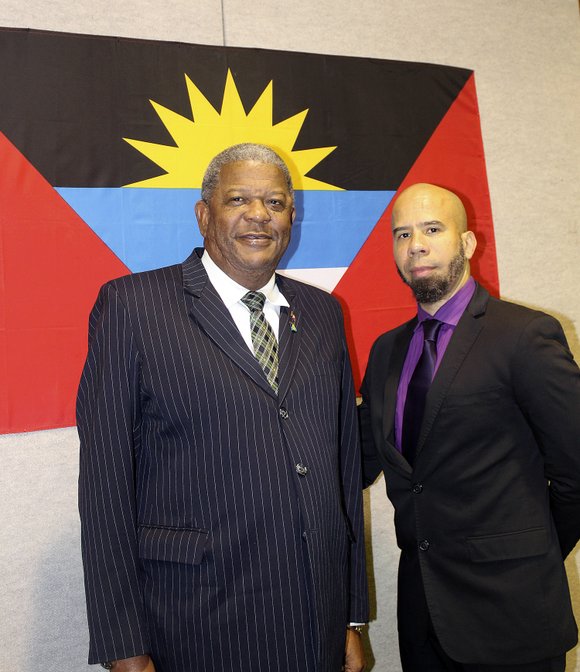 There is a lighthouse in Harlem, and it shone brilliantly on Friday, Sept. 27 when the Antigua and Barbuda Progressive Society (ABPS) and the Schomburg Center for Research in Black Culture launched “A Lighthouse in New York,” a groundbreaking exhibit that will run through Jan. 4, 2014.

At the opening reception and panel discussion of the exhibit, which commemorates 80 years since the ABPS was founded (in 1934), guests enjoying jazz music of the early 20th century gathered in the Manuscripts, Archives and Rare Books Division Reading Room to view materials from records and photos donated to the Schomburg Center.

Arranged in four sections, “A Lighthouse in New York” includes:

Margaret Maynard’s oral history captures the history and work of the society, its political sensibilities, diasporic sympathies and pan-Caribbean leanings, as well as her personal background, the Depression and the society’s activities. In addition, it offers reflections on the society’s past and present.

Also represented are portraits depicting individual immigrants and socioeconomic conditions in Antigua and New York City. A group photo portrays Salome Drysdale, one of the founders of the ABPS.

Valerie Harris-Pole, executive assistant to the prime minister of Antigua and Barbuda, revealed: “An award has been established in her name—the Salome Drysdale Award of Excellence for Women. In 2007, at the 75th anniversary, I was the recipient of that award.”

Later, guests settled into the Langston Hughes Auditorium. A logo of the exhibit, an image of a lighthouse with the motto “Faith, hope, charity and loyalty,” crowned the stage as a young female pannist provided some wonderful calypso and Caribbean folk music of the era. The panel discussion then got underway following a welcome by Steven G. Fullwood, assistant curator of the Schomburg Center, who introduced Derede Samuel-Whitlock, director of the Antigua and Barbuda Tourism Office in New York.

Accompanied by a video with images of the exhibition period, both in Harlem and Antigua and Barbuda, Samuel-Whitlock welcomed the guests and provided a rich history of the times. He mentioned the 1964 purchase of a brownstone on 122nd Street, which still serves as the ABPS official headquarters.

“This is a story about a journey that many of us, or our foreparents, have taken from our island capital to the capital of the world,” Samuel-Whitlock said proudly. “The year was 1934, 100 years since slavery had been abolished in Antigua—one of the first British colonies where slaves were emancipated. Thousands of Antiguans and Barbudans had joined the ‘great migration’ to the United States in search of better economic opportunities. As freed slaves, they were attracted to a country that appealed to their sense of dignity and worth, where their work ethic would help them advance.” She went on to point out how the U.S. was in the midst of the Great Depression, which resulted in the Antiguan and Barbudan immigrants finding themselves on the bread line.

“They were without a support system,” Samuel-Whitlock explained, adding: “In 1934, Harlem was home to a thriving community of Caribbean immigrants, including hundreds of Antigua and Barbudan nationals. The ABPS emerged as one of many immigrant community groups formed to provide assistance to the wageless and to help alleviate some of the economic hardships that their countrymen faced.”

Samuel-Whitlock summed it all up by concluding: “Today, ABPS remains a lighthouse in Harlem as one of the longest continuously functional community organizations. Before we had a national flag, we had a lighthouse right here in Harlem.”

The moderator, Edwina Ashie-Nikoi, an archivist in the Manuscripts, Archives and Rare Books Division of the Schomburg Center for Research in Black Culture, curated the exhibition and introduced the panelists: M. Roz Olatunji, president of ABPS; Beverly Benjamin-George Esq., president of Friends of the Antigua Public Library New York; Harris-Pole; and Tyesha Maddox, a doctoral candidate in New York University’s Department of History. Mona Wyre-Manigo (ABPS) delivered the closing remarks.

Prior to the evening’s closing, Prime Minister of Antigua and Barbuda Winston Baldwin Spencer, who was in New York attending the General Assembly, shared: “This exhibit celebrates an important period in Antigua and Barbuda’s history and highlights some of the struggles and successes of some of the early immigrants, who came to the United States in search of a better life. I applaud the collaboration that has been forged between Antigua and Barbuda Progressive Society and the Schomburg Center for Black Research to ensure that this important message of pride, determination and community spirit is spread throughout the world.”