Government shutdown continues despite enough votes to end it 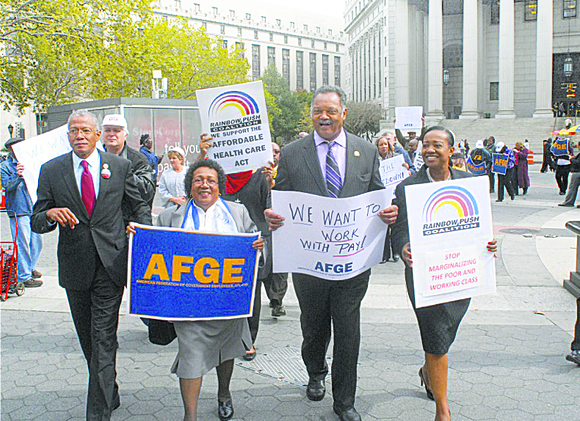 The Rev. Jesse Jackson, the Rainbow PUSH Coalition and the American Federation of Government Employees protest the government shutdown in lower Manhattan. Photo by Bill Moore

As we enter week two of the government shutdown, it has become increasingly clear that there are enough Republican votes in the House to end the impasse, but Speaker John Boehner is reluctant—or hasn’t been pushed enough—to bring the vote to the floor.

The votes are there, according to a recent CNN survey of House members, to pass a continuing resolution, which is at the crux of the dispute between the Obama administration and the few Republicans seeking to delay and ultimately defund the Affordable Care Act.

A minimum of 217 votes is required for approval of the measure of a no-strings-attached bill, and that includes 200 Democrats signing on and 17 Republicans, many of whom are among past dissidents of policies advanced by the president.

“The truth of the matter is, there are enough Republican and Democratic votes in the House of Representatives right now to end this shutdown immediately with no partisan strings attached,” President Barack Obama said in a statement on Monday.

Rep. Charles Dent of Pennsylvania told CNN that he supports a clean government funding bill. “I think now it’s imperative that we just fund the government,” he said, and a number of his colleagues, notably New Yorkers Peter King and Michael Grimm and Frank LoBiondo of New Jersey, agree.

But Boehner, appearing recently on ABC, maintains that there are not enough votes to pass a continuing resolution. “The American people expect in Washington, when we have a crisis like this, that the leaders will sit down and have a conversation,” he said. “I told my members the other day, there may be a back room somewhere, but there’s nobody in it.”

Meanwhile, thousands of federal employees have either been furloughed or expect to be by next Friday, according to one worker on Capitol Hill. “I’ve been told that by next week, I will be among those sent home without a check in the mail,” said Mike Edwards, who just returned from a trip abroad. “Until this matter is settled, all my future plans of travel are put on hold.”

Boehner’s refusal to bring a vote to the floor of the House may stem from his invocation of the Hastert rule, named after former House Speaker Denny Hastert, who never brought legislation to the floor without a majority of Republican votes. But in an interview with the Daily Beast last Wednesday, Hastert said, “The Hastert Rule never really existed. It’s a non-entity as far as I’m concerned.”

Hastert, who replaced Newt Gingrich, is the longest serving Republican House Speaker (1998-2007). After declining to comment on Boehner’s decisions, he concluded by saying, “You can’t be in Congress and shut down the government and get anything done. It’s an oxymoron.” And that latter part of the word might be the best way to characterize Boehner’s behavior.

Below is a list supplied by Wallethub.com of the impact the shutdown is having on various states:

Here’s a hotline that people can use to apply over the phone and get help with the application—or just get questions answered by real people—in 150 different languages. The numbers are 800-318-2596 and 800-318-2596. Check out healthcare.gov. Call that number. Advocates say that folks should then show their family and friends how to use it “to get America covered once and for all, so that the struggles that [the uninsured] folks have gone through, and millions around the country have gone through for years finally get addressed.”