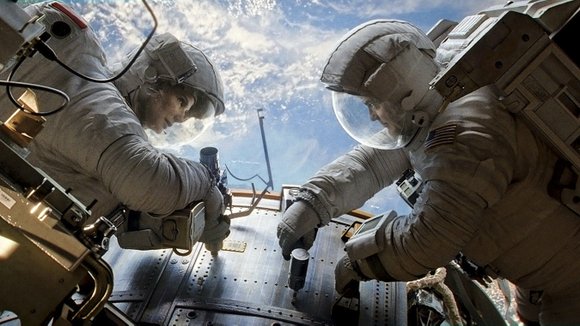 That weighty question has been asked by people for ages. Our collective heads tilt toward heaven as we marvel at the canopy of stars and ponder our place in the vast and unknowing universe. That existential question still remains the topic of debates.

These simple and immediately gripping topics are brilliantly explored in “Gravity,” written by Alfonso Cuarón and Jonás Cuarón and starring Academy Award winners Sandra Bullock (“The Blind Side”) and George Clooney (“Syriana”).

Produced by Oscar nominee Alfonso Cuarón (“Children of Men”) and David Heyman (the “Harry Potter” films), the film unfolds in the silent abyss above the Earth, where the shuttle Explorer is in orbit.

Stone is on her first mission and is very uncomfortable in zero gravity, while Kowalski, a legend in the ranks who is known for his ability to stay cool under pressure, is on his last mission.

On the other side of the planet, an obsolete space satellite is being destroyed, and a miscalculation sends fragments hurling into space, setting off a chain reaction of events.

Their shuttle is destroyed, leaving Stone and Kowalski completely alone—tethered to nothing but each other and spiraling out into the inky blackness and the deeper unknown.

The deafening silence tells them they have lost any link to their home and any chance for a traditional rescue. For Stone, as fear turns to frayed panic, every gulp of air eats away at what precious, life-sustaining oxygen she has left.

“Sip like wine, don’t gulp like beer,” directs Kowalski, who is determined to lead them to the Chinese space station that is just a few miles away.

There is a small window of opportunity available before another wave of sharp fragments impede this imperative goal.Their options are simple but daunting: They must either venture deeper into space or accept their fate.

The searing action is never repetitive, and every frame is inspired. I’ll pay to see this thrilling and wonderfully realized survival adventure again because the visual elements, which are guided by multiple Oscar-nominated director of photography Emmanuel Lubezki (“Children of Men,” “The New World”) and production designer Andy Nicholson (art director, “Alice in Wonderland”), made the film taunt with breath-catching tension.

This is a 3-D experience, and the impressive talents of Oscar-nominated visual effects supervisor Tim Webber (“The Dark Knight”) deliver brutal and unexpected beauty. I can’t imagine him not receiving multiple nominations along with other team members this award season.

“Gravity” anchored inside my consciousness, and behind the thick 3-D glasses, I experienced the primal fear of isolation coupled with the complex emotions surrounding survival—not the “how” of it, but the meatier question: Why survive?

As the two plummeted through space, I felt equally lost and disoriented. When they were confronted with split-second decisions that meant life versus death, I also felt that jolt of energy.

Alfonso Cuarón’s “Gravity” is worth the exploration, and for me, the adrenaline rush made the cinematic experience agonizingly sweet.

“Gravity” opened Oct. 4 in 2-D and 3-D. This film has been rated PG-13 for intense perilous sequences, some disturbing images and brief strong language.