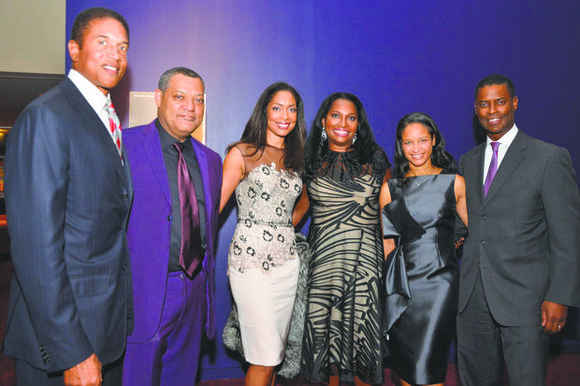 Now that we are in the middle of the fall social season, events are happening everywhere. Take the Greater New York Chapter of the Links, for example. The ladies, along with Anita Farrington, the dean of student affairs at New York University’s (NYU) Poly School of Engineering, were out in full force to host a cocktail reception and art preview acknowledging the Faculty Resource Network at NYU that has so magnaminously presented “Rising Up: Hale Woodruff’s Murals at Talladega College.” The exhibit, featuring artist Woodruff, is currently on loan from Alabama’s Talladega College, and it’s on display at the NYU campus.

Before I tell you how fun the party was, let me tell you how exciting the exhibit is. Woodruff was a historical muralist who vividly captured historical events indigenous to the African-American culture. The bold strokes of his artist brush, rich colors of his palate and his fanciful imagination transformed the pages of history books and placed them onto the canvas, perhaps portraying what really happened without the taint or slant of perspective that sometimes comes with written history. Most notably among Woodruff’s works is the Amistad collection.

The story of the Amistad is as fascinating as it is horrific. The Amistad was a boat, made in Spain and owned by a Spaniard living in Havana, Cuba. As the legend tells, a group of captives, who were originally kidnapped from Sierra Leone, were bought to Havana, where they were to be sold off into slavery. While being transported from Havana to Puerto Príncipe, Haiti, the captives overpowered their captors, killing the captain. Once in control, their goal was to return to Africa. Their only guide back to Africa was the eastern star, which shone only in the night sky. As it turned out, they traveled east by night, but without the stars to guide them by day, they ended up heading north, eventually landing on the eastern tip of Long Island.

Upon reaching land, they were immediately brought before the court, which transported them for trial in New Haven, Conn., where they faced charges of mutiny on the high seas. The courtroom was packed throughout the lengthy and intense trial.

At the center of the trial was Joseph Cinque, leader of the revolt aboard the Amistad. Woodruff, in his Amistad series, brings the courtroom to life. The viewer becomes transported upon gazing at the mural, feeling the rampant range of emotions as Woodruff depicted them to be at the trial; it’s as if the viewer is there amongst the crowd, cheering for justice.

Eventually, all of the captives were freed, as this was the time in American history when the international transport of humans for the purpose of slavery was finally outlawed. The captives were all declared free, and in 1842, they returned to Africa.

Like the saying goes, ain’t no party like a Greater New York Chapter of the Links party, as they know how to do it right. Offered as hors d’oeuvres were a variety of chicken satay from plain to curry and jerk. This was complemented with succulent fried shrimp, a tasty fruit platter and a selection of breads and cheese to round off the plate. Of course, there were a selection of wines, but perhaps the most thirst-quenching beverage was the limeade. All of our friends were there, and those who weren’t were missed. The program was extremely interesting, which was a welcome change from the usual fare.