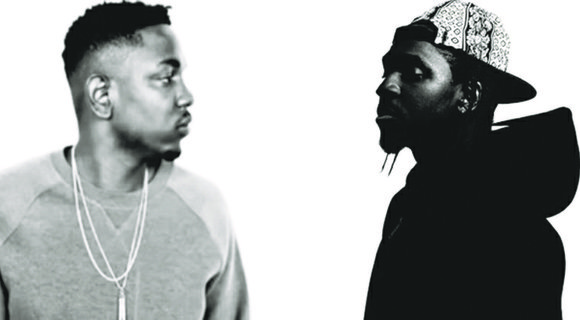 The new music video for the single is stark, minimalist and quietly haunting as Pusha T strolls confidently through a Compton neighborhood in the middle of the night to the rhythm of the equally minimalist and casually beat-driven track, which features a sample from KRS-One’s “The Bridge is Over.” From the onset, the track promises a lyric-heavy narrative from two of hip-hop’s most celebrated rappers.

It could be assumed that Pusha T spelled the track’s name the way he did because he and Lamar candidly tell stories of their past experiences with selling drugs and interacting with addicts during their impressionable years. Pusha T has never been coy about his early lifestyle as a drug dealer, and this track is no different, except for the fact that he coherently tells his personal account of the drug game and how he played by the rules. His impressively stylistic and well-versed story opens the door for the young and highly talented Lamar to add his perspective and past experience to the already gritty and powerful song.

Lamar, who has openly rapped about growing up in a home that was replete with instances of drug abuse and dealing, paints a portrait of what it was like growing up around cocaine when he was 10 years old and living in Compton, Calif. Lamar commands the screen as he appears out of nowhere before becoming shadowed by Pusha T’s figure, and the two walk in unison to the beat of the track.

This track comes across as truthful, real and effortlessly down-to-earth. These hip-hop power players lay down their egos to rap about where they came from. At the end of the song, Lamar announces to his father that the “bricks” he promised him as a boy have manifested in the form of rhymes, highlighting the grudge he holds about the lifestyle his father forced him into in his youth.

Pusha T has taken hip-hop to a new level with the honesty he provides about the drug game in “Nosetalgia.” He raps, “This is timeless, simply ’cuz it’s honest.” That statement couldn’t be truer. “Nosetalgia” is an instant classic simply because it has no pretenses and gives no false promises of power or greatness.