On the Verge: Barkhad Abdi on the seas with Tom Hanks 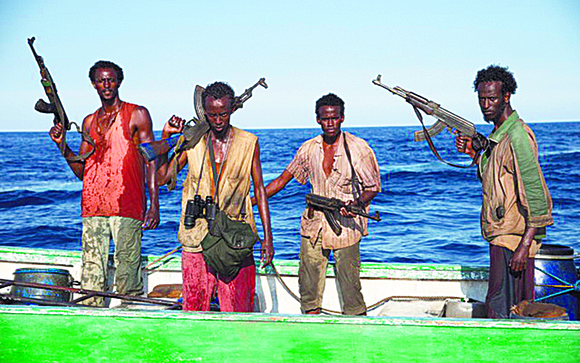 The film awards season—September through March—is upon us, and I’m confident that “Captain Phillips,” directed by Paul Greengrass and starring two-time Academy Award winner Tom Hanks, will receive a heap of nominations and awards—and it will be deserving of all of them.

It’s an impressive and intelligent film, and the acting makes it an intimate experience. In reviewing the film, Manohla Dargis of The New York Times called newcomer Barkhad Abdi “very, very fine.”

I concur. Here’s what Abdi shared about working with a Hollywood legend and learning how to swim.

Amsterdam News: Barkhad Abdi, you were tremendous in your role as Muse. There is even early Best Supporting Actor Oscar buzz around your performance. How exactly did you get the role?

Barkhad Abdi: Fate. I was at my friend’s house watching TV, and I saw a commercial looking for Somali actors for a Tom Hanks film. I went to the casting call, and there were about 800 people there.

They asked me my name, where I was born, my age, and they gave me a page from the script. They told me to read the role of Muse, so I became that character.

AmNews:Barkhad Abdi, 800 people is a huge casting call. How fast did the casting process move?

BA:Fast for me. I went back the next day. Instead of 800, there were 40. From that small number, we were told to form groups, and that’s how we auditioned on day two. We could form our own groups. I took the lead and made my group unique.

AmNews:Sounds too easy. How did the group auditions go? What happened?

BA:Our first group audition went very badly. So we all went home and practiced and did better later. Then we waited and waited. They didn’t call for two weeks—two weeks of silence.

AmNews:Two weeks waiting for a major career break is like an eternity. And then what happened?

BA:Finally, we got a call from the casting director, Francine Maisler, to meet with the director, Paul Greengrass.

We flew to L.A. to meet with Paul. And that is when we were told we all got the parts.

BA:And then I had to jump in the ocean to make sure we weren’t dreaming!

AmNews:The Hollywood ocean is deep and turbulent, but you know that already. So did you work immediately?

BA:No, the work started a few months later. First, we flew to Malta and trained for a month and a half. We had to learn how to swim, fight, use weapons, climb and how to ride a skiff.

AmNews:That is a lot of learning in a short amount of time. What was the biggest challenge during filming?

BA:Swimming. I had never swum before. I couldn’t swim in five feet of water. Honestly.

AmNews:Say what now? You auditioned for a film, that takes place in the ocean and you didn’t know how to swim?

BA:I would DJ pool parties in Minneapolis, but I never swam there. (Laughs)

AmNews:Much like your character, Muse, you’re fearless and determined. What was the most rewarding aspect of filming?

BA:To get to work with all of the people in the film. We learned how a film gets made, and it really was all a great experience.

AmNews:Explain. Film is all “hurry up and [now] wait.”

BA:Waiting was an experience. It was hard for me to scare Tom. I was lost in that scene: “How do I scare him?” I used a lot of my imagination to be in that character. I had to became that character. I did whatever I could to become Muse.

AmNews:Believe me, you became Muse. Shooting on an ocean—I can’t imagine how complicated that is. Is “hard” an accurate word to describe the experience?

BA:It was very hard. Every day, there was a new problem or difficulty. Whatever we were shooting, it was shot at sea. Skiffs weren’t easy. I would get sea sick at times, and I would fall. Plus, the life boat was smelly.

During those times, I really tried to stay in character. Those challenges shaped my character choices. The boat really smelled.

AmNews:What stands out as one of the best days of filming?

BA:The first scene—the village scene—was easy for me. It was shot on land. (Laughs)

AmNews:What would you say the film is really about?

BA:It is a story of two people with very different lifestyles. One went to school and college, got a job and had a family. He has his life on track. One lives in a torn-up part of the world. He didn’t go to school, and he sees this [pirating] as his only chance at a better life.

When these two people come together, with forces outside of their control, they both have to understand each other and live with each other.

AmNews:How do you like New York? You’ve been here before, right? And have you ever been to Harlem?

BA:I have been to New York, and I love Manhattan. I love the energy there. It’s a lot different than Minneapolis—in a good way. (Laughs)