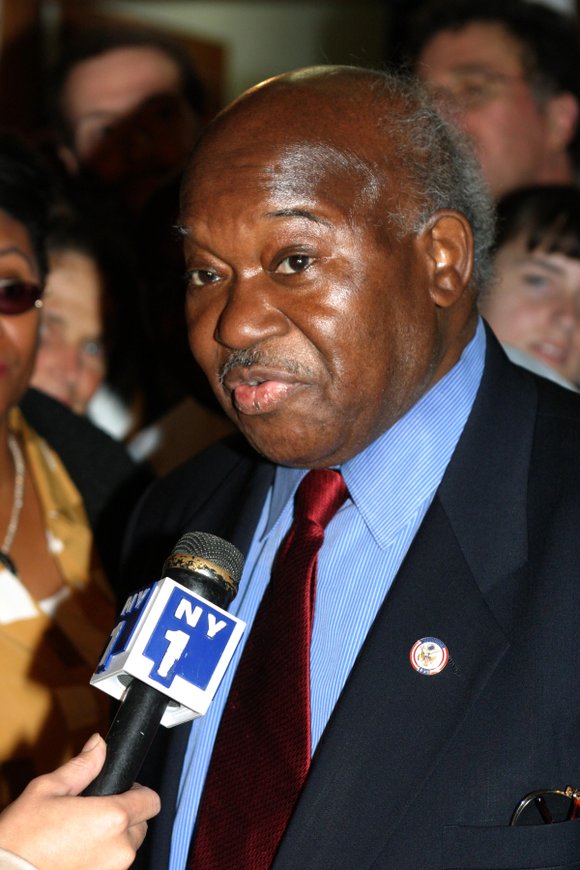 “Major Owens was a man of significance and a man of consequence,” a saddened Council Member Al Vann told the Amsterdam News, as news broke of the Monday night passing of former Rep. Major R. Owens on Oct. 21.

“He was a strong advocate for justice, equality and empowerment for our people. He was an extraordinary legislator. He was a serious thinker, well read, and he will definitely be missed by me and many others in the state.”

In the august of his days, Owens was fond of delivering his praise and critiques via rapping, thereby earning the sobriquet of the “Rappin’ Rep.” But as his constituents in Brooklyn and his colleagues in the Congressional Black Caucus knew, Owens was an able lawmaker and a man of unimpeachable integrity. Owens, 77, died Monday at NYU Langone Medical Center, apparently of cardiac arrest brought on by renal failure and diabetes, according to his son Chris.

From 1983 to 2007, Owens represented Brooklyn’s 11th District in the House of Representatives. Among the laws he wrote or helped to pass was the Americans with Disabilities Act in 1990. Only Rep. Adam Clayton Powell Jr., among New York’s representatives to Congress, sponsored or passed more legislation than Owens. His tenure in Congress was bracketed by Shirley Chisholm, whom he replaced, and Yvette Clark, who replaced him upon his retirement.

Before being elected to the House, Owens served more than seven years in the New York state Senate.

Owens was one of those Brooklyn fixtures who made his mark by his mere presence. Condolences and calls to the AmNews office came thick and fast, with people from all walks of life asking for confirmation.

“Congressman Major Owens was a true Brooklyn champion who served the public with distinction for decades,” said Ken Thompson, Democratic nominee for Brooklyn district attorney. “As a congressman, community leader and tireless social justice advocate, he always put Brooklyn first and never forgot where he came from. My thoughts and prayers are with the Owens family in this difficult time. He will be deeply missed.”

“[Today], New York lost a legend,” said Council Member Letitia James. “Congressman Owens’ commitment to working people in our city was remarkable, as were his accomplishments on behalf of his diverse district in Brooklyn. His legacy—from helping to develop social assistance programs under Mayor John Lindsay, to helping to pass the Americans with Disabilities Act in Congress—lives on. Even after leaving the House of Representatives, Owens never stopped serving—teaching as a professor at Medgar Evers College.

“Our city and our country have been changed for the better because of Congressman Owens’ service. May he rest in peace.”

April R. Silver, founder and resident of Akila Worksongs Inc., called the AmNews to ask if the news was true. “I’m so saddened to learn of Major Owens’ passing on Monday,” she said. “As a former educator, as a proud Brooklynite, as an activist and as someone who had the honor of working with him closely as a member of the Medgar Evers College Coalition, I’m clear that we just lost a giant. Every encounter with Major was characterized by his passionate and steadfast struggle for justice. My prayers are up for his entire family. May he rest in peace.”

Born on June 28, 1936, in Collierville, Tenn., he was a proud alumnus of Morehouse College and Atlanta University, where he earned a master’s degree in library science. He was a librarian before entering the political arena and the only person in the history of Congress with such a background. And despite his passionate involvement in politics, it did not eradicate his love for books. In 2011, he published his book “The Peacock Elite,” which was an unsparing assessment of Black political leadership as well as a proscription for positive change. The politicians and civic leaders in his book are classified as “peacocks” or “workhorses,” and nothing is more telling than his critique of the CBC, which, in his estimation, failed to respond to the expansive poverty in the nation.

Another example of his love for books and his adoration of the students he mentored after leaving Congress occurred in 2010, when he purchased more than $500 worth of books to freely distribute to his students. It was a testament to his generosity and devotion to the young people he tutored.

“Since his retirement from Congress in 2007, Congressman Owens was a Distinguished Visiting Scholar at the John W. Kluge Center in the Library of Congress,” an email from this family added. “At his death, Owens was a Distinguished Lecturer and a member of the Du Bois Bunche Center for Public Policy at Medgar Evers College, City University of New York. Owens served as president of the Central Brooklyn Martin Luther King Commission, and as a member of the board of Brooklyn for Peace and the legal nonprofit organization Advocates for Justice, as well as an advisory board member of the Brooklyn Center for Independence of the Disabled.

“Over the years,” the statement continued, “Major Owens has remained connected to his first profession as a librarian. He is considered a scholar and national expert on library education and information development. He has taught at Columbia University’s renowned library school, and was a featured speaker at the White House Conference on Libraries in 1979 and 1990. In 1996, Major Owens was awarded a Lifetime Membership in the American Library Association.”

To list his numerous awards is an endless task, but it would be remiss not to mention the honorary doctorate he received from Atlanta University in 1988. It should also be noted that he was also the author of three other books and a play and was a regular online contributor to Huffington Post and to other outlets.

He married Maria A. Owens in 1989; each had children from a previous marriage. The blended family of Major and Maria Owens included five children, Chris, Geoffrey, Millard, Carlos and Cecilia, and eight grandchildren. Owens was previously married to Ethel Werfel Owens. They were married in 1956 and divorced in 1985. Major Owens is also survived by four siblings, Ezekiel Owens Jr., Edna Owens, Mack Owens and Bobby Owens.

Expressing his condolences and deepest sympathy to Maria, the sons and the family, Vann added, “He made a tremendous mark in Congress. He was the ‘education congressman.’ He made changes in how Title 1 was funded, which put million and millions of dollars into Black and underserved communities. He served his constituency with dignity and integrity. He will be sorely missed.”

Cards may be sent to the Owens Family, 135 Eastern Parkway, Brooklyn, N.Y., 11238. The family is requesting that all calls be made to 518-556-1052 and emails be sent to family@remembermajor.com. In lieu of flowers, please make donations to the Central Brooklyn Martin Luther King Commission, a 501-c-3 nonprofit organization.

Funeral services for Rep. Major Owens will be held on Monday, Oct. 28 at the First Baptist Church of Crown Heights, located at 450 Eastern Parkway in Brooklyn. The viewing will be held at 9:30 a.m. and the the service will start at 10:30 a.m. Rep. John Williams will be the featured speaker.