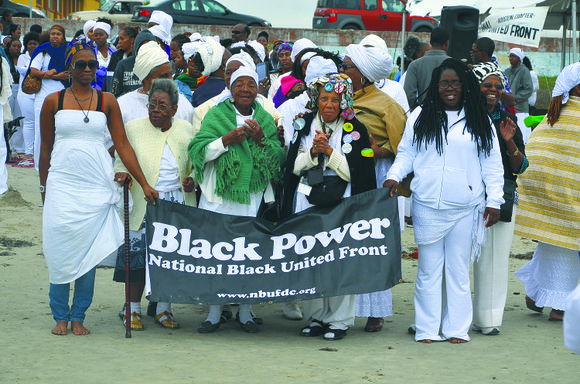 On Saturday, Oct. 19, the National Black United Front (NBUF) convened the 16th annual Sankofa Caravan to the Ancestors on the shores of Galveston, Texas, where enslaved Africans were once brought to the U.S. This year’s Sankofa Caravan honored longtime New York City activists and NBUF founders Baba Seydou N’Joya and Baba Jitu Weusi and former Black Panther Sister Ayanna Ade, all of whom passed this year.

The Sankofa Caravan is an interfaith ancestral commemoration. The event has three key areas of focus: to offer praise and thanksgiving to the creator and our revered African ancestors; to educate our community on African spirituality, history and culture; and to invoke blessings for our community in all worthy endeavors.

The first Sankofa Caravan was held in July 1998 as part of the 19th annual NBUF National Convention. Historian, activist and professor Baba James Small facilitated it. Small suggested that the Sankofa Caravan be institutionalized, and it has been held annually ever since. Past participants of the event have been Marimba Ani; Conrad Worrill; Mutabaruka; Herman Ferguson; and Chokwe Lumumba, mayor of Jackson, Miss. This year’s notable participant was Willie “Mukasa Dada” Ricks. Ricks is a former member of the Student Nonviolent Coordinating Committee and is most recognized for being the source of inspiration for the slogan “Black Power.”

The caravan began at 6 a.m., at the NBUF “Black House” in Houston. Participants came from various locations, such as Tulsa, Okla.; Tupelo, Miss.; New Orleans; Atlanta; Pittsburgh; Dallas; and San Antonio. They all lined up in their vehicles and actually caravanned to the beach in Galveston.

Once participants arrived at the beach, the ceremony began with prayers from various faiths, including Christianity, Islam, Hebrew and the Kemetic tradition. The ceremony was based in the West African culture of Yoruba and was facilitated by Sister Omilana Ifaronke Fagbenro-Amusan, from the spiritual house Egbe Egunfewa. The program included a presentation from KoumanKele African Dance & Drum Ensemble and a symbolic walk through “the Door of No Return.” Through song, dance and offerings of flowers, fruit and prayer, over 250 people, dressed in white, commemorated their personal ancestors as well as those of the Middle Passage, slavery, and the Civil Rights and Black Power movements.