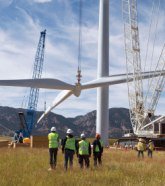 Oct. 29 (GIN) – In the latest development of energy from “renewables” such as solar and wind, the Ashegoda Wind Farm was launched Oct. 26 in Tigray state, Ethiopia. It follows a plan to create a “climate resilient’ economy by 2025.

Africa's second most populous country has been plagued by frequent blackouts. The new energy capacity supplements hydropower from the 6,000 MW Grand Renaissance Dam now under construction on the Nile.

Wind power potential at Ashegoda is believed to be Africa's third-highest behind Egypt and Morocco.

The Ethiopian government covered 9 percent of the $290 million pricetag. Ashegoda Wind Farm was built by French firm Vergnet SA with concessional loans from BNP Paribas and the French Development Agency.

The wind farm consists of 84 turbines towering above an arid region where villagers herd cattle and ride donkey-drawn carts as they have for generations.

Media reports, however, noted that about 700 farmers had lost some or all their land to make way for the farm’s turbines. They were given financial compensation but some complained the money was too little.

The developments have not, however, yielded the employment opportunities so desperately needed by the population. In the face of a skyrocketing number of émigrés, the government this week issued a ban on Ethiopian citizens travelling abroad to look for work.

The foreign ministry said the decision was meant to “safeguard the well-being of citizens,” who were dying or facing physical and psychological trauma because of illegal human trafficking.

Critics condemned the ban as “myopic at best and stone-age governance at worst.” Opposition leader Temesgen Zewdie wrote: “Any sensible government would define the alleged problem and seek solutions without subjecting innocent people to lose their Constitutional and Universal Rights to travel to their places of choice. This type of draconian government decision can only happen in a one-party totalitarian state.”

The travel ban will remain in place until a "lasting solution" is found. w/pix of Ashegoda wind turbines