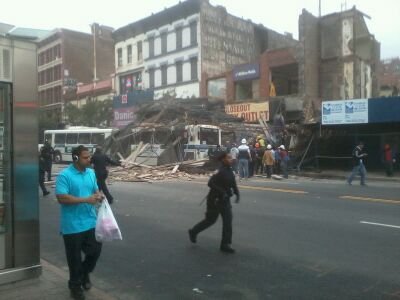 A new study released last week by the Center for Popular Democracy found that construction workers of color in New York state disproportionately face more danger on construction sites than other workers.

The conclusion to the report, titled “Fatal Inequality: Workplace Safety Eludes Construction Workers of Color,” declared that Latinos and immigrants are more likely to die in construction falls than other construction workers.

Falls are the largest cause of fatalities on construction sites.

“Our study explains that construction workers of color, especially immigrants, are at greater risk of death from falls from an elevation because they are more likely to work for smaller, nonunion construction firms that shortcut worker safety,” said Amy Carroll, deputy director of the Center for Popular Democracy, in a statement. “That means that if developers and special interests get their way in Albany and gut the ‘scaffold law’ [Labor Law Section 240], more people of color will die. Rather than weakening safety standards, our representatives should be increasing inspections and requiring more safety training.”

The report reviewed U.S. Occupational Safety and Health Administration (OSHA) investigations into constructions sites involving a fatal fall from an elevation between 2003 and 2011. In the report, it’s revealed that in 60 percent of the OSHA-investigated “fall-from-an-elevation fatalities in New York state,” the workers were Latino and/or immigrant. That rate is disproportionately high considering their participation in construction work (40 percent of all construction workers in New York state are people of color). In the five boroughs, victims in 74 percent of fatal falls were Latino and/or immigrant workers.

The majority of these falls also came at construction sites where OSHA investigations found “serious” violations of safety regulations.

Deborah Axt, co-executive director of Make the Road New York, said that immigrant workers are more likely to suffer at the hands of managers who don’t care about the well-being of their employees.

“This study shows what Make the Road New York members know from personal experience: Latino and immigrant workers are the ones who most often fall, are injured and die when unscrupulous bosses refuse to provide the most basic of safety protections,” said Axt in a statement. “That some of those bosses want to repeal the New York scaffolding law and weaken worker protections further is an offense to the memory of the workers who have lost their lives and an offense to responsible contractors who do the right thing.”

The report called OSHA “ineffective” because it’s underfunded, understaffed and not able to inspect a significant number of worksites at any one time. According to the Center for Popular Democracy, it would take OSHA 107 years to inspect every worksite in New York once, and when they do inspect worksites, the monetary penalties are small (an average of $13,000) and provide no incentive to developers. It’s become a cost of doing business in New York.

Pedro Corchado worked in construction for five years before being injured in a fall accident on a site in 2008. Corchado said that workers usually have no choice but to follow management’s orders or else lose their job.

“Almost anybody who works in construction will tell you it’s hard to refuse a boss’ directions to climb onto a scaffold that’s not entirely safe or go up a ladder without the appropriate safety equipment,” said Corchado. “For most workers, like me, telling the boss ‘no’ is simply not an option. I know the dangers outlined in this report firsthand from personal experience.

“Construction safety needs to be improved and protected; weakening the Scaffold Law cannot be an option when it is a matter of life or death,” said Corchado.

The report recommended that the government appropriately fund and empower OSHA so it can hire and train more inspectors and conduct more inspections, protect and enforce the New York state scaffold law to ensure the safest possible workplace conditions for workers and ensure that all construction owners, contractors and workers receive proper safety training, including learning basic OSHA safety standards.