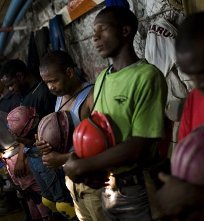 Sep. 3 (GIN) - Some 80,000 gold miners in South Africa have walked off the job after the industry offered a single digit increase in pay. The stoppage was called by the National Union of Mineworkers which represents two thirds of unionized mine workers. Their demands include wage increases of up to 60%.

In advance of the walkout, mine owners upped their cash balance and prepared to “ride out the storm.”

Weeks of talks between unions and companies broke down last week.

Mining Minister Susan Shabangu told the two sides to “find each other soon,” warning that a protracted strike would impact negatively on the economy.

Union spokesman Lesiba Seshoka, in a press interview, responded: "If the bosses can sit in air-conditioned offices earning millions a year, why can't they (miners) earn 7,000 rand ($700) basic a month?... We will strike until they revise their offer.”

The more hardline Association of Mineworkers and Construction Union (AMCU), is pushing for a pay hike of 150 percent.

The average South African miner's monthly pay, including benefits, totaled $1,500 at the end of last year. But entry-level miners receive only a third of that or just $500 per month.

Meanwhile, South Africa’s four biggest gold producers revealed that they are hoarding cash and lining up access to more as they prepare for the first industrywide strike since 2011.

Gold Fields, while cutting costs and spending at its South Deep mine, has imposed a 24-hour, seven-day-week operating model. Labor relations have been “challenging,” they said.

“If we are, let’s say, bullied into a situation that we don’t like, we can ride out the storm for a very long period of time,” Sibanye Chief Executive Officer Neal Froneman told Bloomberg. “That was the reason behind putting cash in the bank.”

Striking miners join 30,000 operators at car manufacturers and 90,000 construction employees. Some 72,000 workers at gas stations and car dealerships may walk out on Sept. 9. w/pix of miners in prayer before shift