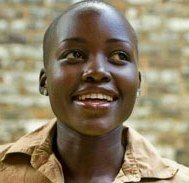 Sep. 3 (GIN) – Movie critics, swept off their feet by Kenyan actress and filmmaker Lupita Nyongo, are predicting an Oscar nod for the captivating new star who appears in the blockbuster movie “12 Years a Slave.”

Based on a true story, the movie tracks Northern-born free man Solomon Northrup (played by Chiwetel Ejiofor) who was kidnapped in Washington, DC, and sold into slavery in 1841.He worked on plantations in Louisiana for 12 years before his release. His autobiography appeared in 1853. The film received a standing ovation during its recent debut at the Tulleride Film Festival in Colorado.

Variety magazine movie critic Peter Debrudge wrote: “Actresses like Nyong’o don’t come along often, and she’s a stunning discovery amidst an ensemble that carves out room for proven talents such as Paul Dano, Alfre Woodard and Brad Pitt to shine.”

Northup’s unforgettable story was also the subject of an American TV film which aired on PBS in 1984. Directed by Gordon Parks, it was released on video under the name “Half Slave, Half Free.”

Born in Mexico, raised in Kenya and educated in the U.S., Nyong'o is a graduate of Yale's drama program and has already directed her own documentary about the treatment of Kenya's albino population. She is best known for her role in MTV's 2009 series "Shuga."

The movie, at two hours and fourteen minutes, is scheduled for release in the U.S. on Oct. 18.