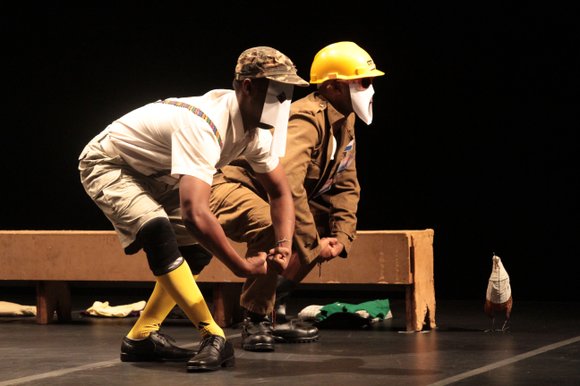 Begin the dance season with shows from international artists Boyzie Cekwana (South Africa with Mozambique) in the U.S. premiere of “The Inkomati (dis)cord,” Sept. 25 - 26, and the New York premiere of Bouchra Quizquen’s (Morocco) “Ha!” Sept. 27-28 at New York Live Arts (NYLA). Cekwana and Canada’s “The Inkomati (dis)cord” “takes inspiration from both the failed, historic ‘Nkomati accord,’ a 1984 non-aggression pact signed by the Mozambique of Samora Machel and the South African apartheid state, and the Inkomati river, which crosses South Africa and Swaziland, ultimately spilling out into the Indian Ocean in Mozambique.”

In this collaboration, Cekwana and Canada are said to “break through artificial borders and traverse territories, using their own bodies, skins, identities and histories … explor[ing] the internalized colonial boundaries that still alienate shared histories and aspirations.” “The Inkomati (dis)cord” is performed by Amelia Socovinho, Maria Tembe, Canda and Cekwana.

Just one year after a successful presentation of Madame Plaza at NYLA as part of “Voices of Strength,” Bouchra Ouizguen returns with “Ha!” On a visit to her homeland, Morocco, Quizguen was “inspired by the cultural terrain and the people [she] encountered … in the desert, mountains, schools and bars—[who in turn] enrich[ed] the movement, song and language in this new work.” “Ha!” is described as “an exploration of madness.” It is performed by Ouizguen and traditional Aïtas Fatéma El Hanna, Kabboura Aït Ben Hmad and Naïma Sahmoud, with lighting by designer Jean Gabriel Valot. These presentations are co-presented with the French Institute Alliance Française’s Crossing the Line 2013 Festival. For more information, visit www.newyorklivearts.org.

Sept. 10-Oct. 12: “Blink Your Eyes: Sekou Sundiata Revisited,” the seven-month citywide retrospective celebrating the work and legacy of the late poet, performer, educator and activist Sekou Sundiata, concludes with two months of programming this fall. The events include a reimagining of Sundiata’s “The Circle Unbroken is a Hard Bop” (1992), directed by Kamilah Forbes, co-founder and artistic director of the Hip-Hop Theater Festival; an adaptation of Sundiata’s final staged work, “The 51st (Dream) State” (2006)” as a musical theater piece for radio, directed by Arthur Yorinks and featuring the original cast; “WeDaPeoples Cabaret” and much more. For more information, visit www.mappinternational.org.

To be listed, send press releases to amnewsdancecalendar@comcast.net.